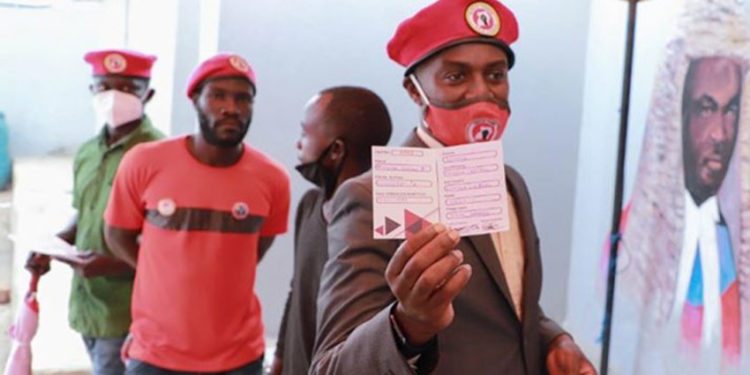 The midweek announcement that publicly known anti-opposition activist Andrew Mwenda had joined Bobi Wine’s National Unity Platform party would as expected, make it to the top of the list of the most popular news items of the week.

The whole thing started during a political television talk show where the veteran journalist furiously accused the Kamwokya outfit of intolerance and violent conduct.

During the NBS TV discussion, Mwenda who seemed to be much bent on showing Bobi Wine’s group as unfit to run the affairs of the nation argued that with the level of intolerance at the NUP headquarters, with their mobilised gangs of youths fed on ” weed and cocaine” he would be lynched on sight if he dared set his foot there.

The cunningly determined Mwenda went ahead to share that he would relinquish his entire life’s inheritance if he made it out of Kamwokya alive after visiting them.

At Kamwokya, Mwenda opted for the party membership instantly amid ululations from NUP fanatics who have been a daily appearance at Kamwokya in the recent days.

Unknown to Ssenyonyi, he had led his party into an irreversible mistake of a life time!

The unpredictable scribe would moments later announce his intentions to run for the Party’s highest office and challenge it’s current supremo Robert Kyagulanyi for the Presidential candidature in next year’s general elections.

Not only did he make known his devilish ambition to take over the party leadership, he also challenged it’s defacto leader Robert Kyagulanyi to a public debate.

Eventhough, it’s highly unlikely that Mwenda could challenge and defeat the strong man from Magere for the NUP flag, the debate on any likelihood of him at the helm the Kamwokya outfit is not one you would wish to ignore.

Mwenda has publicly publicised his eternal hatred for the Ugandan opposition with no exception to Mr Wine – the founder of the party he just announced his intentions to lead and become it’s presidential candidate next year.

For Mwenda a former NRM regime critic whose views have drastically shifted in favor of President Museveni over the years would understandably have no problem standing against the country’s rulers but the only question that would remain is whether his genuine intention would be to chase them out of power or to neutralise opposition.

Whatever comes out of the vote therefore will leave the Kamwokya group on a constant watch like a hen that lays it’s egg under the watch of a hungry wolf.

Popular political commentator Tamale Mirundi warned NUP that welcoming Mwenda into their ranks is the biggest mistake that is bound to complicate their life in future.

With him intent to challenge for the party leadership and subsequently Presidential candidacy, any attempt to lock him out would plung the new party into protracted legal battles likely to make their life at a time they badly need to keep their attention to the polls of next year.

Whatever happens between the parties, all we have to do is to watch critically so we can keep you updated.