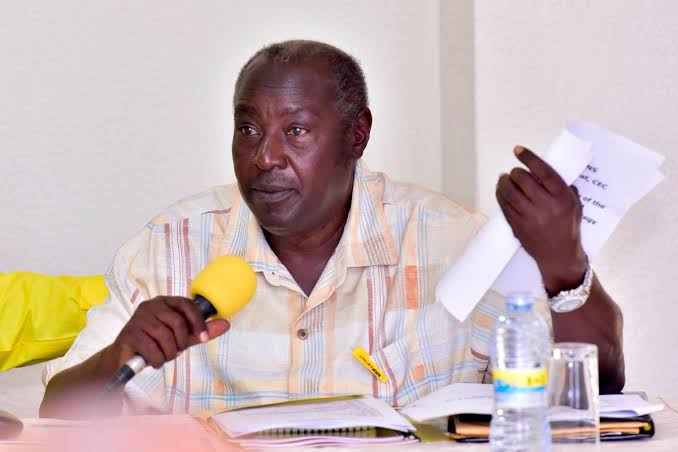 As the quest for leadership positions in the ruling National Resistance Movement party [NRM] heads into a climax, tensions must be boiling among the party’s most faithfuls over any slight possibility of reigning first National Vice Chairman Alhaji Moses Kigongo losing in a three horse race challenge with Capt Francis Babu and 33 year old Keefa Mufumu.

Unlike in 2015 when he was unopposed, Kigongo will this time round have to fight in a bid to retain the position he has held since the county’s return to multiparty politics in 2005.

Eventhough the chances of him losing the contest are reasonably thin, one can’t afford to miss out on a debate of what Kigongo’s loss would mean for the party he has served, molded and believed in with his unreserved loyalty.

Had it not been for the Party’s core democratic values, many would have probably wished Mzee Kigongo to sail through unchallenged just like party Chairman President Yoweri Museveni owing to his irreplaceable significance to it.

Without any doubts, Kigongo remains favorite to retain the position although the current situation raises one partinent question ; What if he loses?

Kigongo is a rare species of a leader within the ranks of the ruling party, having opted to embark on a career behind the elective political scene even when he could have been any thing he wanted to be owing to his unwavering contribution to the war that brought his party to power.

Kigongo’s reserved appetite for power is however not a new seed in him. As the NRA war was coming to it’s climax as the guerillas headed for Kampala, the then youthful combatant was delegated by his Commander the current President to head the offensive against the Anyanya regime that would later give them way into the capital.

At the time, Museveni had reportedly sneaked out of the country probably to seek reinforcements.

The atmosphere in Kigongo’s native Butambala was a bizarre one with the Lutwa regime outfit staging a fight of their life in the rural area.

Kigongo was however, able to mobilize the guerilla force under his command to finally give the Tito Okello Lutwa forces a bloody nose and finally matched to the capital with ease.

When President Museveni made it back successfully, Kigongo handed over the command without any resistance to the surprise of many who believed he could have wished to keep the presidency for himself.

That’s who he is! A man of his values and unmatched loyalty whose word will always be the same.

In his campaigning message as he reaches out to party delegates around the country seeking to keep their trust in him to continue steering the party partly formed with his blood and sweat, Kigongo amplifies his age as a basis for members to keep trusting him.

He says he is the right person to continue guiding the young generation who have sporadically come out to join leadership.

According to Hajji Kigongo, these young people need to continue under strict mentorship and rightly believes he is more suited to the task than no other.

Besides that alone, the sworn eternal Museveni ally has over the years played the role of an able ombudsman within the party, diffusing tensions among party members every time there has been need.

Being someone who has not held big political positions even when he could have had them if he wished, Kigongo has earned the respect of the party members deservedly.

This has helped to propagate a relatively peaceful environment within the party which has partly seen it consolidating power for the last nearly 35 years.

Besides his role in brokering and promoting party unity, Hajji Kigongo, a senior Moslem closer to the corridors of power has significantly served to water down religious persecution accusations variously crafted by regime enemies aiming to turn the Muslim community against government.

Kigongo, as the second most powerful man in the party in power has reportedly worked around the clock to ensure that any possible clash between muslims and the government is subdued.

Needless to say, both the other candidates vying for the position are good and strong cadres of the party especially former Captain Francis Babu.

The veteran aviator will forever be remembered for winning the ruling party the Kampala Central MP seat in the City that has been predominantly opposition.

He would go on to serve in the position for a record 10 years, becoming a member of President Museveni’s cabinet in the process. This makes him a true force worthy anyone’s recognition.

Even then however, many party leaders will most likely be having their hearts hitting their rib cages vigorously in anxiety that could see their most ideal Museveni deputy at the helm of the party.

MAXWELL MUWANGUZI APPOLO: Bobi Wine's NUP party can use any colour registered under its name

MAXWELL MUWANGUZI APPOLO: Bobi Wine's NUP party can use any colour registered under its name