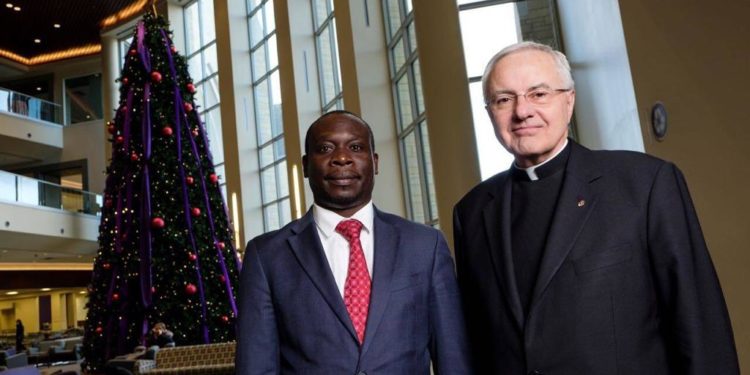 Charles Lugemwa’s daughter got a fever when he was in Kampala with his wife, Maria, a veterinarian. They took her to one of the medical facilities they assumed was well equipped. A nurse turned up with an injection which was not meant for the girl, and administered it. She died.

After losing his little daughter over the fatal mistake by a medical worker, Lugemwa who had no previous medical field interest, turned grief into grace, growing one of Uganda’s best equipped hospitals in metropolitan Kampala.

Among miracles that have come through, reveals Lugemwa, the lady on whose behalf the first seed donation to build this hospital was made, getting healed from cancer. The other, one beautiful day, someone  abandoned a premature seven-month baby girl along the road, not far from the Ruth Gaylord hospital gate. She was taken into the neonatal section and is now a healthy joyful little girl. Lugemwa and his wife have adopted her, and believe God brought their daughter back into their lives.

“God gave us another girl, and she is now fully a member of our family.” Lugemwa says.

When Hope Medical Clinics was set up, they had a vision to offer affordable medical care for all. It is the two that eventually gave way to Ruth Gaylord Hospital, which now provides affordable healthcare to patients who under normal circumstances might never access such service. To the worst, be left to die because they cannot afford a right diagnosis, and treatment.

Ruth Gaylord Hospital located in Maganjo has modern facilities from the laboratory, ultrasound, dental, maternity, neonatal, among others. It is located six miles north of Kampala city, along Bombo Road, in Maganjo-Kawempe, Wakiso District.

The hospital’s mission is to provide self-sustaining, affordable and equitable community-based health care services through a dedicated and professional workforce.

Its story started way back in 2007 with a dream of building a chain of Hope Medical Clinics Uganda where treatment could be accessed. The first clinic was in Ndejje area and the second, in Kasubi.

The vision for the hospital became reality when a priest made a donation to honour his friend Ruth Gaylord a retired Minnesota music teacher. Msgr. James Habiger, the former executive director of the Minnesota Catholic Conference, even made the name suggestion. He made the initial seed donation in her honor because she was battling cancer at the time. Lugemwa testifies that by God’s grace, Mrs Gaylord healed from cancer and even she attended in person the unveiling of the hospital in March 2013.

Lugemwa and Fr Dease registered a nonprofit in US, called Friends of East Africa Foundation through which they mobilize funds and equipment, for Hope Medical Clinics Uganda, the vehicle through which the hospital is run.

The software engineer with a full-time job in Information Technology at Uganda Revenue Authority has a succession plan in place that would ensure the hospital expands and outlives its founders.

Among the interventions include Ruth Gaylord hospital being affiliated to the University of Minnesota Medical School through which annual free surgeries by American surgeons are made. Last year, at least 41 life saving surgeries were carried out. The university team is headed by Dr Gregory Beilman who is Vice President of Fairway Healthy Systems of Minnesota. The others are Dr Timothy Schacker who is th deputy Dean of the Medical School and board member of Hope Medical Clinics Uganda.

Mr Lugemwa says this has enabled them to build capacity including knowledge transfer and having the latest medical technology at the hospital because these medical personnel donate the equipment they work with after the free surgeries.

The other program is about creating value for families who fund different units at the hospital in honour of their loved ones. There is a lot love and good will that has followed this program.

Several people have donated blocks and equipment in memory of their loved ones including Tom Bisanz who gave a grant to build the Outpatient block in memory of his mother, Helen Bisanz. Susan Shawlbach who honored her mother with the Jane Annstrome block which houses the Maternity department which she also equipped including the labour suite. Shawlback who Lugemwa refers to as Sue, also built a chapel at the hospital where the patients and staff get spiritual nourishment. Megan and Denis Doyle donated the initial equipment used to start the hospital. They are also funding one of the endowment apartments block.

The tiles used in the hospital were donated by Brian Mark the founder of RBC titles in Minnesota. “He shipped them from his factory in Italy,” Lugemwa says.

Gary Holmes, the other benefactor is an entrepreneur who funded the storied building which accommodates visiting medical surgeons and it has rooms for private patients who can afford medical services at the market rate.

Lugemwa explains that the money helps to cater for those people who come in and they afford pay. The Gary Holmes building also houses the Neonatal ICU, which was generously donated by Dr Eric Kylar the President Emeritus of the University of Minnesota in honor of his wife on her birthday.

Lugemwa spoke about the endowment fund as one of the solutions to ensure continuity and sustainability.

“The fund helps us subsidize the cost of treatment for patients who cannot afford,” he says, adding, “The other funds help us replace equipment when we cannot fundraise.” And of course, for future usage.

Lugemwa explained that through the endowment fund resources are used to create and build assets for future funding of the hospital in case donors don’t come through. Their donors Megan and Denis Doyle are funding one of the endowment apartments block. Such resources have enabled them to build a three block apartments project with two-bedroom suites.

Not all funders are from US. This hospital has got good nodes back in Uganda. The land on which the entire project was built is a lease from Kampala Archdiocese, thanks to the Archbishop of Kampala Dr Cyprian Kizito Lwanga. Meanwhile, Stanbic Bank contributed towards the acquisition of the ambulance.

These resources will be kept in the endowment fund for future use.

Background
Mr Lugemwa and Father Dennis Dease go back to University of St Thomas Minnesota, where the Ugandan was a software engineering master’s degree scholar. Fr Dease was the university president and actually sponsored his studies. 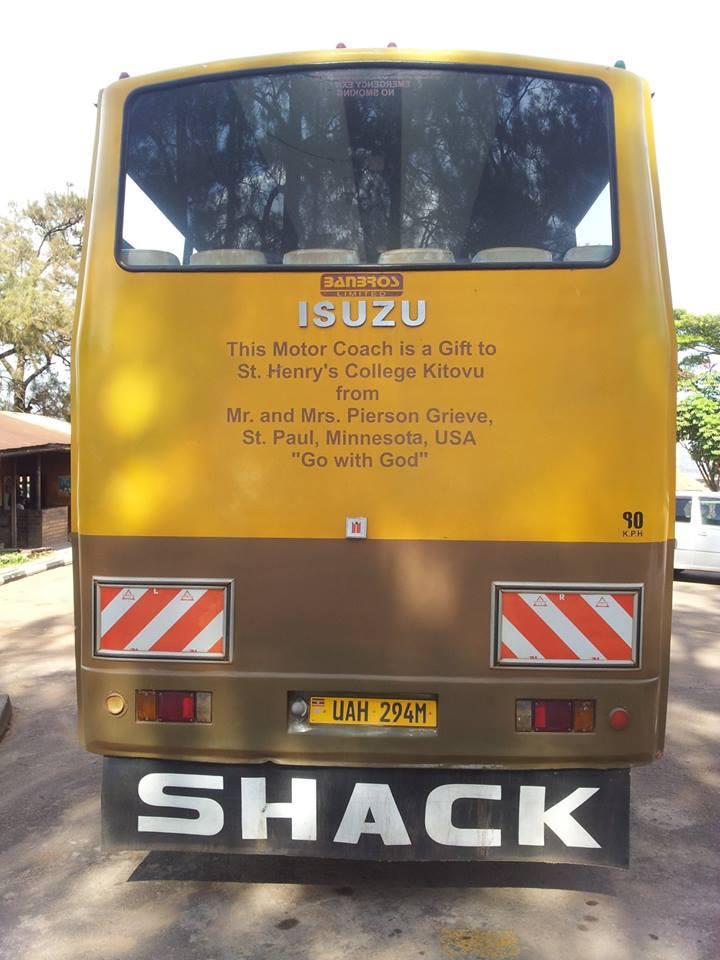 The old boy of St Henry Kitovu in Masaka graduated from Makerere University with a Bachelor’s of Statistics in 1997. After working at URA, he took up the challenge to upgrade with a masters in software engineering. That was 2001. He graduated in 2003 and returned to Kampala.

However, the US Catholic institution continued to work with him to light more candles. The university regards Lugemwa as one of its most outstanding alumni, with several awards to his name for his service to humanity; including the 2013 Humanitarian year award winner, University of St Thomas, St Paul Minnesota, USA; and the 2016 Minnesota Campus Compact Presidents’ Awards.

After returning to Uganda in 2003, Lugemwa continued to host a number of St Thomas current and past students in Uganda, and has been instrumental in connecting local students, especially from St Henry Kitovu to scholarships at this university.

At some point, these contacts donated the first school bus to Kitovu through Lugemwa who delivered it personally on the visitation day.

With partnerships from medical, church, business, academic contacts in Minnesota, a US state he attended for his post graduate studies, his friends have supported him to set up one of the best medical practices in Uganda.

Ruth Gaylord has become known as a low-cost hospital which offers world class medical services. From diagnosis to treatment to surgeries.

There is a team of dedicated doctors treating over 2000 patients a month. These medications are reserved elsewhere for the A-List of this country who can afford expensive treatment at upscale facilities in Kampala or out of the country. Here, every life matters. Even for the poorest.

Meeting Lugemwa and touring the hospital

I met Lugemwa through a mutual friend. He had inquired if I knew a man called Charles Lugemwa. I told him, No. He told me this is one Ugandan making a difference in the medical field. He sent me a video showing Ruth Gaylord hospital, and Lugemwa and with Father Dennis Dease, priest who has been instrumental in the making of this dream come true.

When I decided to contact Lugemwa, he gave me an appointment last Saturday. He welcomed me to a cafeteria at the hospital where he offered me lunch.

He took me around the hospital from the reception area which works as the outpatient. The chief executive, Peter Kiggundu, sits at the common office shared by the accounts section, pharmacy and he can see the outpatient section very clearly.

Mr Lugemwa is quick to emphasize. “We want the CEO to see what is going on. Our priority is the patient.” The chairman took me through the different places at the hospital including the laboratory, which has the most modern lab equipment, giving patients real time testing and results.

We went through the X-ray rooms which also use computer systems to provide ultra-clear images. There are electronic scan services available Monday to Sunday, which the attendant says could be the only in the country. The equipment is C-9 which means it gives one the most updated diagnostics for a number of checkups one might need. We visited the maternity section which has two operation theaters which offer caesarian sections.

“Sometimes one theatre might be busy and we get an emergency case, the second theatre comes in handy,” Mr Lugemwa explained, pointing to self-contained theatre facilities.

“When a surgeon and his team are here, no one walks out,” he said. The theatre attires are washed, ironed and kept within the theatre facilities as well as toilets and bathrooms.

The maternity supports mothers through antennal, child birth, post-natal. The department is headed by a gynecologist and obstetrician.

We walked to the female wards, catering for 64 beds, and two isolation rooms.

When a patient is in critical condition, they are taken to these rooms, which have two beds, a television, toilet and monitoring equipment.

The other block has a children section, alongside a male ward, dental section and neonatal special care nursery, where we found a seven-month baby in a warmer. The caretaker said, when babies have jaundice, they are cared for in that equipment. However, this section is equipped with CPAPS, incubators, photo-therapy equipment, oxygen and medical air, and patient monitors. They are monitored by a pediatrician.

The story of Ruth Gaylord Hospital, and its founders, starts with a loss which has become a blessing for many people. It is a story of hope, faith and love, with a happy present and insured future.