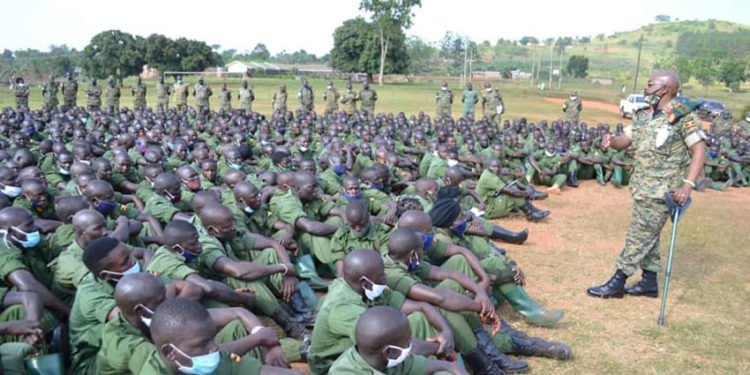 The Chief of Staff Land Forces (COS- LF) of the Uganda Peoples’ Defence Forces (UPDF), Maj Gen Leopold Kyanda has given an interactive lecture to the Local Defence Unit (LDU) personnel undergoing refresher training at Kakiri Barracks, where he urged the trainees to work towards being citizens with reputable images.

The COS-LF thanked the LDUs for the commendable work they have done in fighting criminality in Kampala metropolitan policing area despite a few isolated cases of indiscipline that he referred to as very grave act against the good image of the UPDF.

“In the UPDF, we have no space for any form of indiscipline; there is no amount of indiscipline that is small to us. A mere abusive language or annoying gesture to the civilians is too grave an act to do. You must work towards correcting these mistakes as you conduct your operations,” said Maj Gen Kyanda.

He further told the LDUs that “You are part of the UPDF and members of the larger national security structure of our country. You must therefore measure to the expected disciplinary standards.”

Maj Gen Kyanda encouraged the LDUs to pay attention during every lesson delivered to them because the training material are interlinked; beneficial in conglomerate.

“This is a very important course necessary for your ideological growth; a prime necessity in your career in the UPDF. It is important that you grasp every bit of the lessons taught because it will help you today and in the far future, not only as members working in the UPDF but also great citizens of this country,” said Maj Gen Kyanda.

Maj Gen Kyanda is one of the several senior resource persons drawn to mentor the LDUs with a focus on ideological rejuvenation.

“This course is intended to inculcate and uphold in you the time-tested UPDF ideology of a Pro-People Force,” he told the trainees.

He added that after the course, the LDUs will be able to execute their duties more effectively.