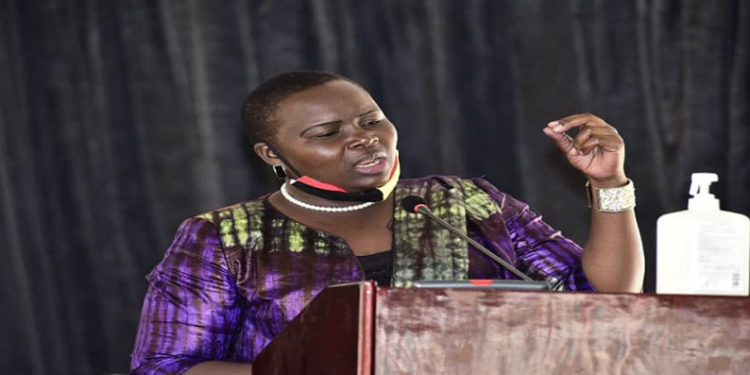 MP Amongin speaking in the House on Wednesday, 22 July 2020

Members of Parliament have called on Government to give more time to women beneficiaries of the Uganda Women Entrepreneurship Fund (UWEP) to repay their loans.

The members said that most beneficiaries have been affected by the Corona virus pandemic that has also devastated various sectors of the economy.

The Fund is a grant given to women entrepreneurs in the country by Government through the Ministry of Gender, Labor and Social Development.

Ngora district woman MP, Jacqueline Amongin, said during plenary sitting on Wednesday, 22 July 2020 that most of the women beneficiaries were running small business enterprises that had been affected by the national lockdown.

“Banks have given leeway for loan repayment. The Ministry concerned should do the same and give women under the UWEP programme a grace period of six months within which to pay back the percentages in the grant,” she said.

Amongin also prayed that the money that had already been paid back by some women groups be sent back to the districts’ financial coffers, so that it may benefit other women groups.

Judith Franca Akello (FDC, Agago district) said that just like women groups, many youth groups that had benefited from the Youth Livelihood Program (YLP) had found it difficult to pay back within the expected time period.

“It would be better to request Government for a grace period of one year since the interest is charged annually. This will give our people more time to pay this money back,” Akello said.

Speaker of Parliament, Rebecca Kadaga, said that the Finance Minister had previously told the House that Government would give relief on some loan repayments, and that the Bank of Uganda had written to banking institutions in that regard.

“But when we told the Minister to bring that instrument, he has not come back. I am not sure if it is there, but if it is, we must see it,” said Kadaga.

State Minister for Youth and Children Affairs, Florence Nakiwala Kiyingi, acknowledged that there had been depression in many activities of youth and women due to the strict Covid19 lockdown in the country.

She also highlighted the contractual obligations made with each of the 100,000 groups countrywide, as per the programme guidelines.

“It was specified that not only in Covid, but when a group anticipates that it will not be able to remit the payments, the probation officer and the district must be informed so that a letter to the ministry for a waiver is submitted,” Nakiwala said.

She added that many women groups had received waivers from the Ministry following necessary guidelines and promised that a paper would be presented to the House on the matter.