by Mubiru Ivan
in News, Politics
30 1 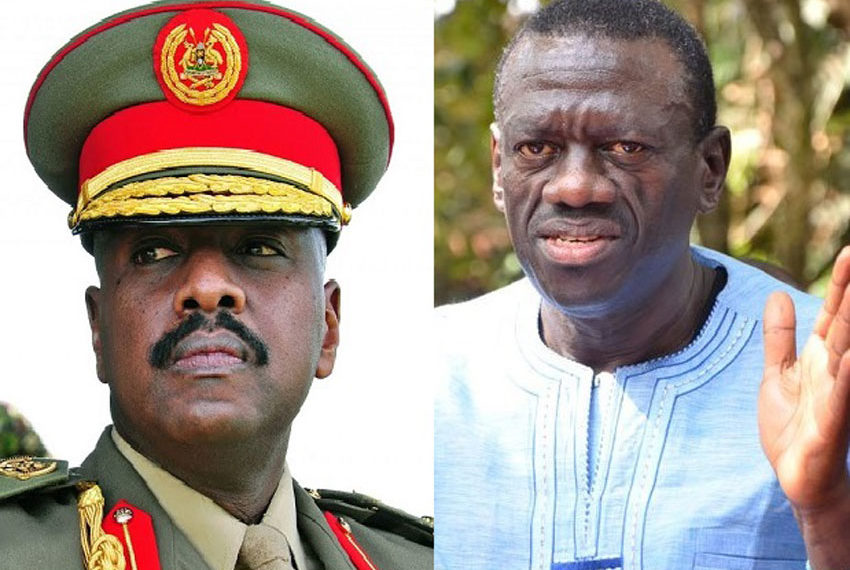 Former Forum for Democratic Change( FDC) president general Dr Kizza Besigye has revealed that he was aware that Gen Muhoozi Kainerugaba was preparing to join politics to replace his father Yoweri Museveni as President of Uganda.

Appearing on NTV on Tuesday, Dr Besigye said he had no problem with Muhoozi seeking election, as long as Ugandans choose to change the political system, which he said continues to dominate citizens with guns.

“The confusion that persists is thinking that we are seeking to replace Museveni without changing the system and ending gun rule. Museveni can also run under his bus…I know his son is already warming up, he will come, he is already a general. But it is not about the individuals; we must simply subordinate the guns, to make guns our servants not our masters.”

But as the debate on 2021 elections rages on and as pundits continue to weigh which candidate is better placed to beat Museveni, one man seems to be building his base in preparation for the 2026 presidential election. That man is Muhoozi who is also a Senior presidential advisor on special operations.

Muhoozi has not come out openly to express interest in running for president in 2026 but he has of late been hinting on his political ambitions. From praising his father and uncle Gen Salim Saleh who now heads Operation Wealth Creation (OWC) to saying he pities those who oppose him and his father, and to recently claiming that nobody can defeat him and his father because they are descendants of the Bachwezi, Muhoozi has left pundits talking.

A few months ago, the First Son also said his friends have turned the curse that his enemies thought they would bring upon him by alleging the so-called Muhoozi Project, into a blessing.

“Some evil people coined this phrase to try and destroy us! But trust my generation to convert every curse into a blessing! Thank you, Ugandans!” said Muhoozi in a post in early March to which he attached a photo of himself donning a yellow hooded jumper reading ‘Muhoozi Project’.

In 2013, former spy chief Gen David Sejusa got in trouble with Museveni after he claimed that there was an alleged plan to eliminate senior government and military officials opposed to the Muhoozi Project where he alleged the First Son would succeed his father as President once Museveni leaves office.

A group that includes events promoter Balaam Barugahara and Frank Tumwebaze, the Minister of Gender, Labour and Social Development, has been marketing Muhoozi’s 2026 presidential project. Among other things, they have made donations to the Covid19 national taskforce on behalf of Muhoozi (under the name Friends of Muhoozi), and recently donated food items to starving online influencers such as Ashburg Katto who crossed from People Power pressure group of Bobi Wine, the Kyadondo East MP, to NRM.

Since he joined NRM after meeting Museveni who gave him five cows and promised to implement his ghetto development proposal after Covid lockdown, Ashburg Katto has been using the laptop donated to him by Balaam to promote Museveni’s 2021 presidential bid and Muhoozi’s 2026 election project.

Previously, Muhoozi has suggested talks with Bobi Wine whom he called his former friend. Muhoozi also claimed that his supporters had begged him to try and advise the singer turned politician not to use violence but to seek peace. Some interpreted Muhoozi’s interest in holding talks with the People Power chief to mean that he saw him as a great opponent to his presidential ambition.

World Nature Conservation Day: Ugandan religious leaders to air out their views on nature and environment

World Nature Conservation Day: Ugandan religious leaders to air out their views on nature and environment

48,000 people use Uber services in Kampala, company gears up for aggressive marketing in Uganda