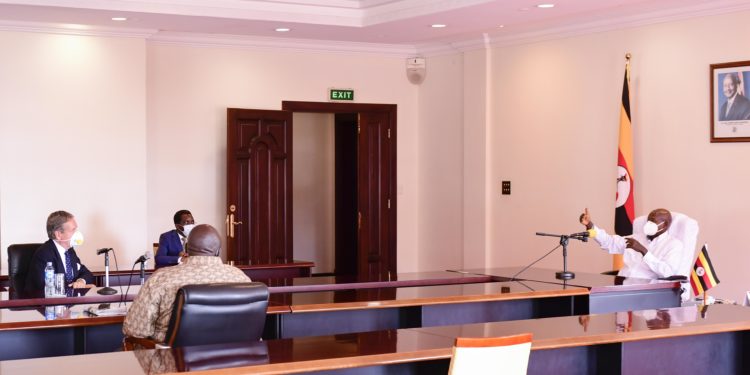 President Yoweri Kaguta Museveni in a meeting with the German ambassador to Uganda, Albrecht Conze together withn the Foreign Affairs State Minister Okello Oryem at State House in Entebbe 2020.

STATE HOUSE, ENTEBBE: President Yoweri Kaguta Museveni has this afternoon bid farewell to the outgoing Ambassador of Germany to Uganda H.E Dr. Albrecht Conze who has concluded his three-year tour of duty in Uganda.

Ambassador Conze today paid a courtesy call on President Museveni at State House Entebbe during which he briefed the President about their Projects in Uganda. He thanked the Government of Uganda for the support rendered to him during his tour of duty and pledged to further promote Uganda in his new role in Germany.

Among the EU countries, Germany is one of Uganda’s most important trading partners (with bilateral trade worth approximately 210 million euros), alongside the UK, the Netherlands and Belgium. The balance of trade both with the EU and also with Germany is in equilibrium according to reports.

“It is unforgettable memory of having worked in your country for 3 years. I have come to say good bye after my tour of duty,” Ambassador Conze said.

President Museveni congratulated Ambassador Dr. Albrecht Conze for the achievements registered during his tour of duty in Uganda.

“You are a good Ambassador, that’s why it looks like you have been here for a short time when in fact it has been three years. I wish you good luck,” he said.

Ambassador Albrecht Conze was appointed as German Ambassador to Uganda in July 2017 and took up his full functions after having presented his credentials to the Ugandan President on 7th November 2017. Before Kampala, Ambassador Conze came from Bamako in Mali.

The meeting was attended by the State Minister of Foreign affair Hon. Okello Oryem.