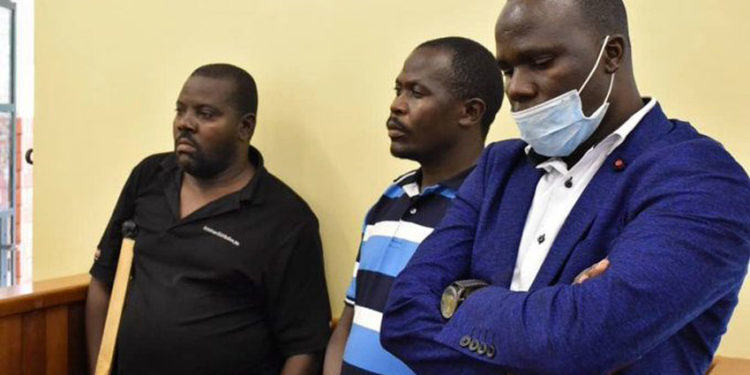 Peter Ssegane, Jimmy Suuna and Kennedy Avola (who works at Mpigi District Land Office) on Monday appeared before Grade One Magistrate Moreen Mukoya who read to them charges.

Ssegane and Suuna are alleged to have encroached on Museveni’s private land by fraudulently acquiring five titles. The disputed land is located in Katwekambwa in Kabulasoke Sub County, Gomba District.

The accused denied the charges and were remanded until July 28.

The state alleges that on December 18 2014 at the Ministry of Lands in Kampala District, Ssegane, Suuna and others still at large wilfully made false statements purporting to own customary interests in land at Kabulasoke Sub County, Gomba District in their application procured registration dated December 18 2014 as properties of land comprised at block 369 Plot 5 whereas not.

Last month, the State House Anti-Corruption Unit arrested Ssegane and Suuna after receiving a complaint that President Museveni’s private land had been encroached by the accused.

“Working with the Police, investigations were initiated and the suspects arrested,” said Lt Col Nakalema, the Unit head.

She also revealed that Ssegane and Suuna had fraudulently acquired 5 titles on land already registered in the name of Yoweri Kaguta Museveni.”

“We identified a number of lapses in the processing of the titles at the levels of the Area Land Committee, District Land Board and Ministry of Lands.”