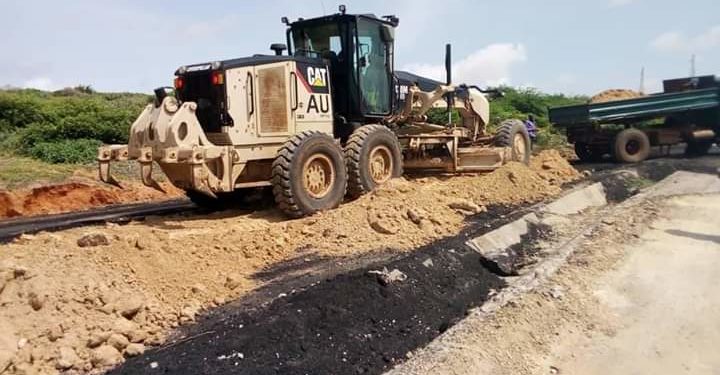 The Barawe District Commissioner, Sheikh Umar, has commended the Uganda Peoples’ Defence Forces’ (UPDF) Engineers under African Union Mission in Somalia (AMISOM) for their quick response to improve the poor roads in Barawe.

Barawe, which is situated approximately 207 Km Southwest of the capital Mogadishu, is the area of responsibility of Uganda’s 29th Battle Group (BG XXIX)) to Somalia with the Battle Group Headquarters located in Embresso.

Just like many parts of Somalia, Barawe was gravely ravaged by floods in the wake of the recent heavy rains in the country. The roads in Barawe and other parts of Somalia were affected, thus making transport very difficult. One journeying from Barawe to Somalia required a whole day’s travel or more to Mogadishu.

In response to this situation, Uganda’s BG XXIX’s Engineers under the command of Maj. Eng. Oyonge have, in the last 48 hours when the floods started in Barawe, conducted emergency road repairs and drainage fixing in the critically affected areas to enable normal flow of traffic in the sensitive routes. Maj Oyonge said the works are still ongoing to ensure ease of access in and out of Barawe.

“Barawe has been considerably affected by unabated floods over the past two days. We have so far made a smooth progress towards addressing the problem with the intention to accomplish the work as soon as possible to ease transport of both people and vehicles. The road works is entirely being done by the AMISOM UPDF Engineers,” he said.

Sheikh Umar was impressed by the quick response and the quality of works being done by the Ugandan AMISOM Engineers.
“On behalf of the government, I want to thank AMISOM troops for the good and timely road works they are doing here in Barawe.” He said adding that, “I also thank them for their support and sacrifice to the people of Somalia. We sincerely appreciate and hail you for all your efforts rendered to us since 2007 when Somalia’s security situation was very wanting.”
Sheikh Umar reiterated the commitment of Somalia’s Government and the community in working with AMISOM to achieve lasting peace for socio-economic transformation in the country.

The District Commissioner further observed that the AMISOM Force in Barawe not only came in to share in the security challenge of the local people but also appropriately responded in sensitizing the community on COVID-19 pandemic and are now fully engaged in mitigating the effects of the floods.
“This is true Pan-Africanism,” he said.

The BG XXIX Civil-Military Cooperation (CIMIC) Officer, Capt Obed Mbarebaki noted that the activities in Barawe are enshrined in the UPDF pro-people ideology.

In that line, the Battle Group Public Information Officer, Capt. Geoffrey Sande reiterated that UPDF is not only focused on the security of the people in Somalia but also the enabling conditions for socio-economic transformation in the country.

Letter to the Editor: My community found a way to teach children without gathering them in classes