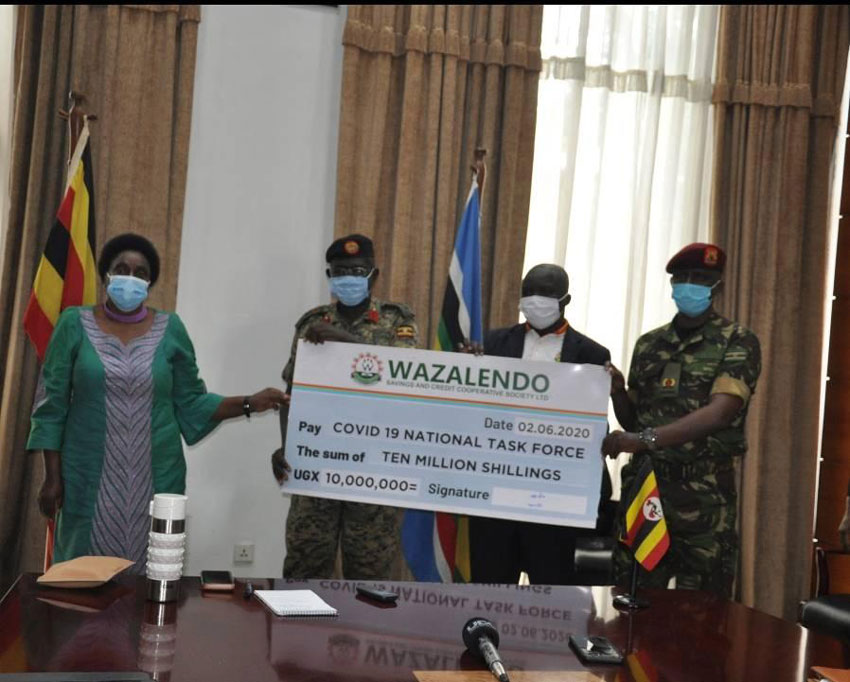 The Minister for General Duties in the Office of the Prime Minister (OPM), Mary Karoro Okurut, received the cheque at OPM premises in Kampala on behalf of the Rt. Hon Prime Minister, Dr. Ruhakana Rugunda.

Karoro thanked WSACCO for standing with Ugandans in times of difficulties posed by the COVID-19 pandemic and hailed the organisation for upholding all the core values expected of SACCOs.

“WSACCO is not only an accountable and transparent organisation but also very exemplary in its operations. It is for such reasons that it has excelled in the country and is able to contribute towards the health of Ugandans,” she said.

She noted that the successes of WSACCO is founded on the discipline of the Uganda Peoples’ Defence Forces and the committed service of the mother Ministry; Ministry of Defence and Veteran Affairs.

“Wazalendo is one example of a successful story portraying the discipline of the UPDF. We thank President Yoweri Museveni for the fundamental change he brought about in the history of Uganda’s military,” she said.

Karoro called upon other SACCOs in Uganda to follow in the footsteps of WSACCO in order to contribute meaningfully to the wellbeing of their members and the nation at large.

Handing over the cheque on behalf of WSACCO, Col John Nuwagaba, the Political Commissar for the Organisation, thanked the COVID-19 response team for the good work done so far in ensuring Ugandans are safe and are helped to cope with the challenges brought by the pandemic.

“There is no doubt that Uganda is globally recognized for its effective response to this pandemic; thanks to the President and an effective response team,” he said. He said WSACCO is the biggest SACCO in the country and continues to grow due to not only a committed membership comprising of UPDF personnel and MODVA staff but also the good leadership at the helm of the UPDF.