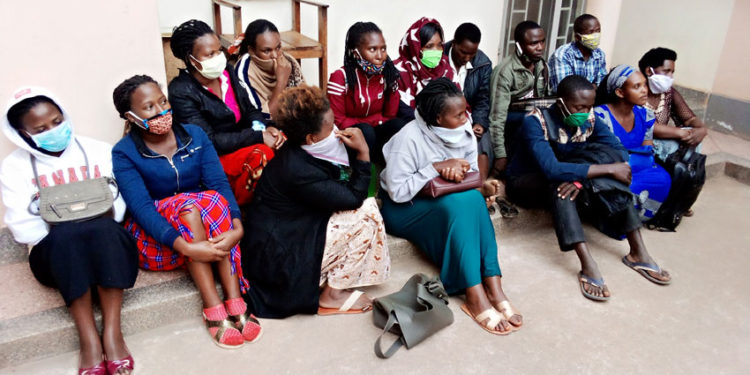 At least fourteen members of Word of Faith Church in Nyabikoni in Kabale Municipality were on Wednesday arrested by Kabale police for holding prayers,which is against the presidential directives aimed at stemming the spread of Covid-19.

They were arrested at Makanga Hill in a pine tree forest in Kabale Municipality during what they termed as a prayer mountain. The arrested include ten women and four men.

President Yoweri Museveni in his address on the 31 of March 2020 banned public gatherings including churches until further notice as one of the preventive measures against the possible spread of Coronavirus in the country.

Pastor Obed Ndyamuba,the Head of the church pleaded for mercy on their behalf , saying that his Christians were hungry for God considering the fact that churches have been closed since 31st of March.

Alex Shema,one of the arrested speaking to our reporter said they had gathered for a prayer to seek God’s intervention so that Covid-19 is defeated.

“Look at how Coronavirus has ravaged the world? We cannot beat this virus without seeking God’s help,” Shema said.

Elly Maate, the Kigezi Regional Police Spokesperson , over 50 people had gathered for prayers many escaped when they saw Police.

Maate condemned the act, saying they did it very well aware it was against presidential directives,and the arrested would be charged according to the law.

“I don’t think they have done this out of ignorance. They are deliberately did so. I want to warn our people to continue provoking police but when we land on them, they will know that that the law is ther,e” Maate said.

They will be charged with the offences of going against presidential directives on Covid-19 and doing an act that is likely to spread the novel coronavirus.

This case has been registered at Kabale police station under file number SD 48/10/06/2020.

Speke Hotels staff excited about their return to duty, trained to serve without putting guests or themselves at risk