Eat your cows in Peace! Bobi Wine bodyguard Eddie Mutwe blasts Ashburg Katto for listing him among those spying on People Power leader 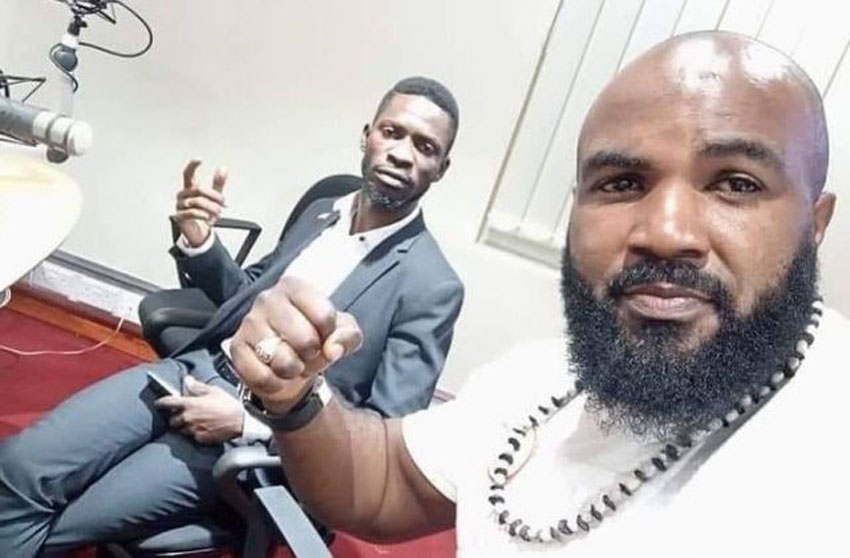 Kyadondo East MP Robert Kyagulanyi Sentamu aka Bobi Wine’s body guard Eddie Mutwe has fired back at former People Power colleague Ashiraf Kato aka Ashburg Katto for including him on the list of those who have been backbiting and spying on the pressure group’s principal.

After officially crossing from Bobi Wine’s People Power to President Yoweri Museveni’s National Resistance Movement (NRM), Facebook blogger Ashburg Katto claimed that Eddie Mutwe, Bobi Wine’s bodyguard who has previously been arrested alongside the MP and presidential hopeful, has been backbiting Bobi for being stingy, suggesting that Mutwe could have crossed from People Power even before him.

But Mutwe has come out to deny ever backbiting Bobi Wine, spying on him or betraying the struggle by working with pro-Museveni agents. He accused Ashburg of failing to use the opportunity of working with Kyagulanyi to improve his life.

“I had chosen to ignore these allegations because they are meaningless but tell your friend (Ashburg Katto) to eat his cows and leave me alone. I don’t know the amount of money one can pay me not to support Kyagulanyi,” said Eddie Mutwe.

“Being close to Kyagulanyi is the most precious thing so far, and if you are hardworking like some of us and leave him when you are poor, that is how you will die cursing.”

Mutwe then renewed his pledge of allegiance to Kyagulanyi, saying, “Mr President (Bobi Wine), I swear to you I am still with you, and there is no amount of money they can ever bribe me with and I accept it to betray you.”

The Marine Survey for Huawei Marine’s PEACE Project is Underway