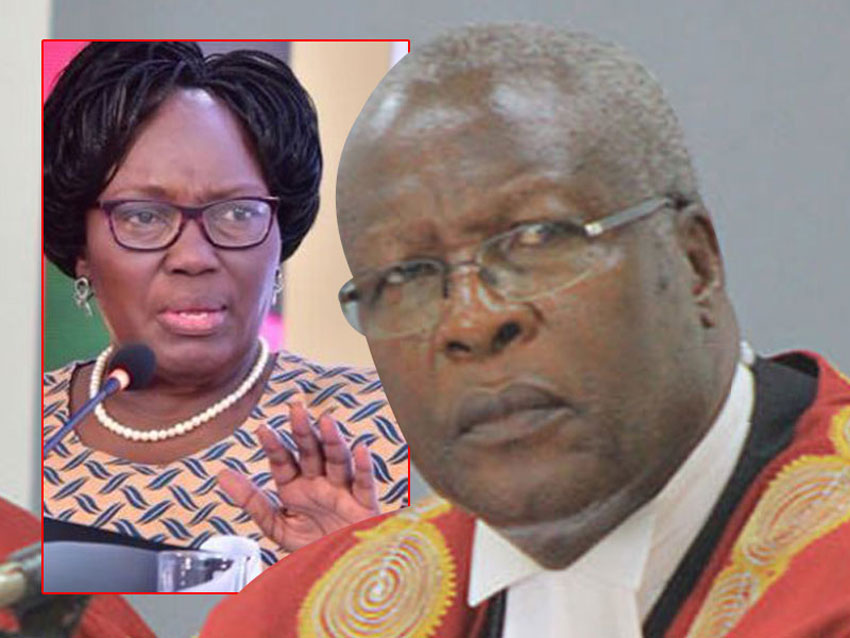 Kadaga’s newest onslaught on the judiciary is the fiercest in three years since she described a court injection issued by then Deputy Chief Justice Steven Kavuma as a “stupid court order.” In 2017, Justice Kavuma had issued an order barring Parliament from investigating how 42 government officials illegally shared the Shs6b oil cash bonanza for helping Uganda win an oil case. Kadaga said Kavuma and the judiciary had gone too far by ordering Parliament to stop its probe into the oil handshake scandal.

Then, she was clear in her condemnation of what she called the Judiciary’s meddling into Parliament’s work. She said: “I cannot accept a decision where court shall determine how we sit in this House. How we shall write the Order. Court is interfering in the oversight powers of the House. It is going to the core of democracy in this country. This is unacceptable. I want to direct the Attorney General to go to court and ensure that this stupid order is vacated. I want the rights of MPs fully reinstated.”

AG Byaruhanga explained to Kadaga that the first part of Esta Nambayo’s temporary order had been that the Parliamentary Commission should not distribute the money to the MPs in case it had not been doled out by the time the directive was issued on April 21. The judge had also directed that the law makers should not spend the money just in case it had been sent to their accounts by the time of issuance of the order, added Byaruhanga.

He further argued that while he had found out that the money had been sent out to MPs on April 17, four days before the court order, making it look like it had been overtaken by events, “the court decision in and of itself is binding on the parties to the suit and also on the Members of Parliament until it is reversed or until the court gives further guidance.”

“The general principle regarding this is that a party who knows of the order whether the order is null or valid, regular or irregular cannot be permitted to disobey it. That principle is found in common law and it has been reiterated by several times by our courts,” the Attorney General had guided.

“The MPs who spent the money after the 21st of April would be held to be in contempt of court. Permit me then to say that of course the Parliamentary Commission or any member who feels aggrieved by this order is open to challenge it before that court before it is discharged.”

But Kadaga, herself a lawyer, openly disagreed with Byaruhanga insisting that the money had been sent out by the time the order was issued and that court had no business with members’ accounts because they were not party to the suit filed by Karuhanga and Odur.

Reading between the lines of Byaruhanga’s advice, Kadaga was convinced that the Chief Government Legal Advisor was working against Parliament’s interests, suggesting that he was encouraging “the courts to overrun Parliament.”

“We have been complaining about the role of Attorney General in defending Parliament. Sometimes we don’t know which side you are on, sometimes you have abandoned us there in court. You have consented with the other side, leaving us helpless,” the Speaker told the Attorney General, who is responsible for advising and defending the three arms of government, and other State organs.

She also accused Justice Nambayo of granting prayers that Karuhanga and Odur had not included in their petition.

She then told Byaruhanga and members, most of whom had rallied behind her in condemning Byaruhanga for siding with the Judiciary to ‘scandalise Parliament’ and upset the principle of separation of powers, that obeying Nambayo’s order would set a bad precedent and would encourage future interference into the running of the legislative arm of government.

“Next time, the court will say ‘take off your clothes when you are in the House’ and we shall have to obey,” she said.

Once again, she played the ‘independence of Parliament’ card, just like she did with the Kavuma ‘stupid order.’ Analysts have argued that the difference between her disagreement with Kavuma then and her disregard of Nambayo’s order and Byaruhanga’s advice now is that while she was aiming at exposing corruption three years ago, she currently wants to cover it up.

By publicly accusing the AG of taking sides and rallying MPs to reject the court order, Kadaga has sent a clear signal to Chief Justice Katureebe and the judges he heads that she will no longer respect all their orders. In other words, she has told them to stop telling her what to do in her House and how to do it.

Meanwhile, the Judiciary has shot back. Uganda Law Society (ULS) President Simon Peter Kinobe has told Kadaga and her MPs that “the judiciary as an institution must be respected,” adding that the Speaker and legislators must avoid uttering “statements meant to undermine it [the Judiciary] in any way.”

Kinobe further reminded the Speaker that while she had the right to disagree with Byaruhanga’s advice, parliament ought to “use legally established methods of addressing circumstances where they disagree with such advice.”

He also told Kadaga, Parliamentary Commission and MPs that “orders issued by the courts of law should be respected” because “they are binding regardless of whether any party finds them unreasonable or otherwise” and “any party aggrieved by a court order should use established legal procedures to expunge or quash it, but until that order is reversed by another order it should be respected.”