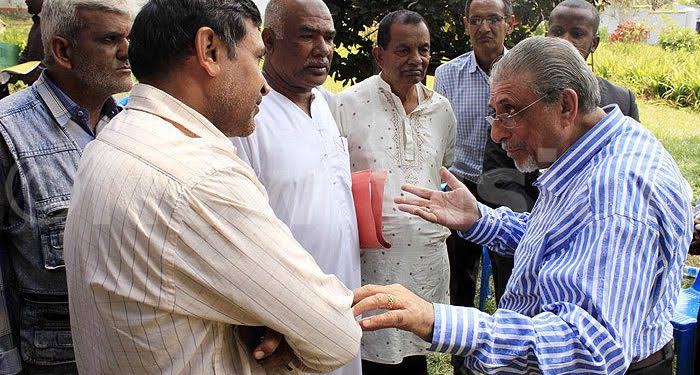 The Chairperson of the Association of Expropriated Properties owners Limited, Mohammed Alibhai faces arrest over contempt of Parliament.

Alibhai has on three occasions failed to appear before the committee investigating suspected irregularities in acquisition of Departed Asians Properties.

The Director of Alderbridge Real Estate & Management Limited, the company that manages more than 900 properties was expected to testify before the select committee of Parliament’s Committee on Commissions, Statutory Authorities and State Enterprises (Cosase) chaired by Makindye East Member of Parliament Ibrahim Kasozi.

He was expected to explain how he repossessed some contested properties.

After failing to show up again on Tuesday, Mr Kasozi ordered the arrest of Mr Alibhai demanding that he is produced by police before the task force on Thursday.

“We have given Mr Alibhai enough time to appear before this committee and he has defied. The committee is left with no option other than to issue a warrant of arrest and he should be produced by police to appear here on Thursday at 10am,” the legislator ordered.

Mr Alibhai last appeared before the committee on September 11 last year and has since ignored invitations, saying that he and several other Asian-Ugandans are being “targeted for second expulsion”. They have since  run to the Constitutional Court.

Who is Mohammed Alibhai?

Unknown to many, Alibhai’s financial chest is from the vast real estate pegged on his name which is subject to Parliament’s investigation by the select task force of Cosase probing the departed Asians property mess.

He has made his money off the properties he claimed from the Departed Custodians Board under questionable circumstances.

Now, complaints are in high gear not only in Uganda Parliament, but also Canadian authorities are finalising plans to request the government of Uganda to hand him for trial, as Canadian Citizens who are part of the Ismaili Community living in Uganda prior to 1972 Idi Amin’s deportation order, owned these properties.

When the government of Uganda resolved to return property back to Asians, Alibhai was one of the shrewd people who sought powers of attorney from Canadians who feared to return to Uganda to make their legitimate claims. Others did not have interest at the time. However, now many families want their property back but Alibhai is fighting tooth and nail to keep them, despite having made billions from the said properties.

The businessman, who according to a 2007 published report in the New Vision newspaper, is one of the wealthiest individuals in Uganda, has over 900 properties pegged on his name.

These properties however, it has been revealed, he obtained them in questionable circumstances.

And one of these days, Alibhai might face the greatest test of his life, after Speaker Rebecca Kadaga sanctioned COSASE to take the probe of the departed Asians property mess to Canada and United Kingdom.

The subcommittee will hear and verify claims made by managers of the Asians Custodians Board and the current owners of the property, in what is set to be table shaking exercise.

Hundreds of Asians who relocated to Canada after Idi Amin evicted them from Uganda in the early 1970s, either gave powers of attorney to people who have been telling them lies about their property statuses in Uganda, or, lost property all together to dubious people.

Some of the properties were also grabbed by powerful individuals and threatened the departed Asians into silence.

Alibhai according to Departed Asian Property Custodian Board (DAPCB), is one of the people who illegally reclaimed and later sold off these properties through his company Alderbridge Real Estate and Management Ltd.

DAPCB through sessions they have had with the Cosase sub-committee in the past months revealed that they have information pinning Alibhai and top government officials and tycoons who illegally repossessed and sold off these properties under questionable circumstances.