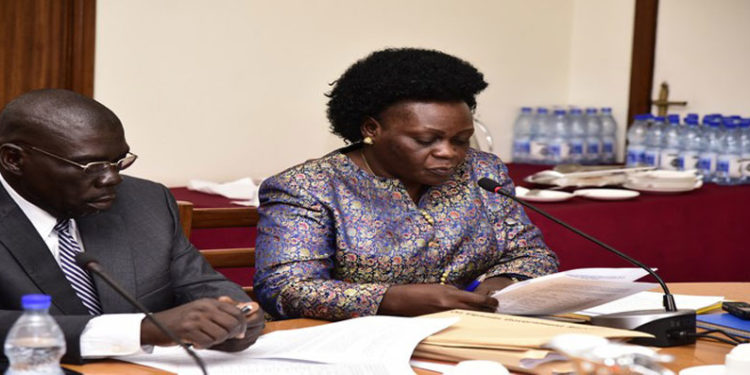 Artisanal gold miners under their umbrella body Mubende United Miners Assembly (MUMA) which brings together 21 associations have asked the Ministry of Energy and Mineral Development to return their original land with gold deposits that had been redistributed to other miners.

A team from MUMA led by John Bosco Bukya met with Committee on Natural Resources and representatives from the Ministry of Energy and Mineral Development led by State Minister for Mineral Development, Sarah Opendi to hear the decision of the government on the fate of the artisanal miners who had been evicted from their land. The meeting took place on Tuesday, 10 March 2020.

In 2017, 60,000 artisanal and small scale miners in Mubende were evicted from the mines on the orders of President Yoweri Museveni on grounds that they were conducting illegal gold mining activities and destroying the environment.

Bukya said that the land granted to them was not mineralized and was not their original land taken away during the eviction.

“We have conducted extensive exploration tests on the land and have discovered that the land we were given is not mineralized,” he said that, “we have also received resistance from some of the new land owners because they are worried that they might be evicted like us”.

Bukya added that much as the Ministry has come out countless times to state that MUMA has not done enough exploration, they are willing to invite them to conduct the exploration.

He said that MUMA is willing to take back at least one square-kilometre of the land they originally operated on.

The Chairperson of the Committee, Hon. Keefa Kiwanuka said that the Ministry had earlier failed to respond to the matter and solve it amicably.

“As the ministry, you need to call these people, sit down and come to an agreement with them over this issue; all they seem to want is a small piece of productive land so that they can survive,” he added.

Hon. Reagan Okumu (Aswa County) said that the government needs to stop concerning itself with foreign investors to hear the plight of its locals because they are suffering.

“The locals are asking to be given back their land; they would not be here if what was rightfully theirs was not taken away,” he said.

Minister Opendi said that MUMA had failed on their part to put to use the land allocated to them, putting no effort into exploring the land for mineralization.

She said that the Ministry had allocated 30 location licenses to MUMA miners but only four associations had conducted explorations which are not enough to render the land non-mineralized.

She said that the ministry is worried the artisanal miners’ demands will never stop if they are always yielded to.