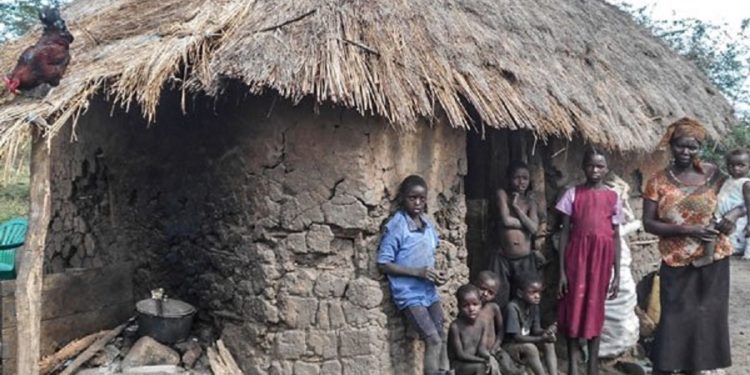 Some of teh kiryandongo residents that have been allegedly evicted

ShareTweetSendShare
The Resident District Commissioner for Kiryandongo, Mr Peter Debele, has warned the Speaker of Parliament Rebecca Alitwaala Kadaga, against falling prey to the unscrupulous people in Kiryandongo who have mastered the art of trading lies in exchange for individual aggrandizement.
In a telephone interview with this website, Debele was responding to Kadaga’s concern over what she referred to as a mass eviction of over 35000 people in Kiryandongo. Last week, the Speaker had appealed to the relevant authorities to attend to the plight of the people allegedly evicted from their land. She made the remarks during a House session in the afternoon of Tuesday, February 25. She questioned reports from officials who she said had told her that the group had got onto the said land on their own.
“Where was the government as these people were erecting schools, churches and other private establishments on the land,” Kadaga wondered.
The RDC has since taken time to explain the genesis of the problem, maintaining that the group claiming eviction is actually aiming at getting more than what they deserve. He says there is tangible evidence that the ring leaders of the claimants are actually people that have been compensated more than once each time there has been an investor taking over their land. He informed that these people would construct tents on a ranch upon getting to know that an investor will soon be taking over. They would then demand that they get compensated for the land, alleging that they have stayed on the said land for 20 years or so.
He added that the impasse has been complicated by fraudulent politicians who have tended to use the situation as a way of reaping political devidents.
“Some politicians are using these poor people as a mobilisation tool even when they know the truth. Because they need votes from the locals, all they have to trade are lies and intrigue, ” the RDC said in disappointment.
While commenting on the reports that some people have received as low as Shs200,000 in compensation for their land, Debele explained that since these people do not own the land, they are normally compensated for the developments on the land and not the land itself. Adding that since these people normally occupy the land on speculation that an investor might pay soon, there are no big investments hence some can be worthy even less than 200,000.
He challenged the people claiming eviction to present evidence that they have stayed on the said land for as long as 30 and above years as they claim. “You find someone claiming to have stayed on a particular ranch for 30 years and when you ask them the LC one Chairman five years back, they cannot tell you,” Mr Debele said.
He faulted the Kampala media houses for writing lies about the situation, creating unnecessary tension and panic in the country. He wondered how the media would report about the eviction of 35000 people which he who is on the ground has never seen.
“35,000 people! In Kiryandongo her? Where are they? Can that reporter from daily monitor show them to the country so we can see them,” wondered the President’s envoy. He also refuted the reports that over 14 schools had been demolished in the course of the wide range of evictions,saying these were just fabricated lies without any relevance.
He appealed to the media to exercise professionalism while informing the nation, adding that misinformed reporting can be a recipe for disastrous conflicts. He also asked them to embrace patriotism while executing their duties, castigating journalism for hire and sale as an inappropriate practice in a country plagued by social tensions. He also asked all media houses to reach out to his office in search for the truth of the matter, saying that Cooperation from his office is assured.
In response to the accusations by the victims claiming illegal evictions that his office had blocked the relief that the office of the Prime Minister had extended to them, Debele denied the accusations, dating he had not received any instructions from his bosses about the same, adding that his office doesn’t act on hearsays.
He however said he would still block the relief if asked saying he can not let crooks use his office in their well orchestrated fraud.
The views of the RDC seem rhyme with those of the District Police Commander, Mr Joseph Bakaleke, who sited dishonesty as the genesis of the claims by the people claiming to have been evicted.
Do you have a story in your community or an opinion to share with us: Email us at editorial@watchdoguganda.com

Drama as pilot flies Kadaga to an unintended destination