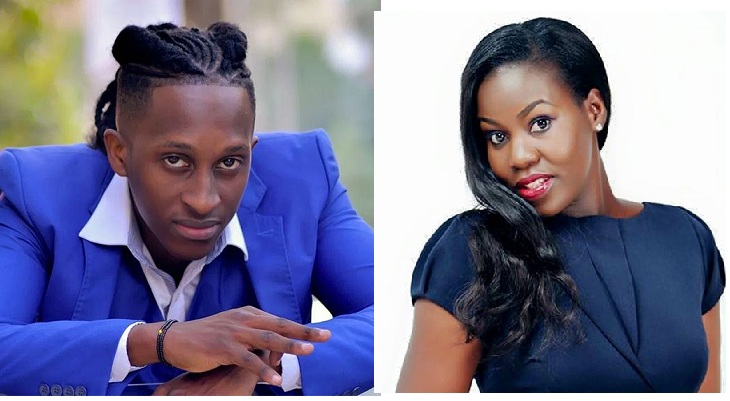 The ‘love’ between singer Bruno Kigundu aka Bruno K and NTV Uganda’s Faridah Nakazibwe has been taken to another level.

It started off as a rumor, after gossips alleged that Bruno K and Nakazibwe were secretely relating after her relationship with Umar Ssali failed to work out.

On Friday last week, during NTV Mwasuze Mutya show, Bruno and Nakazibwe didn’t accept, neither did they deny these rumors, but at least Bruno confessed that he loves women who are just like Nakazibwe; ‘old and mature’.

“Who wouldn’t love Faridah? She is one of the very few beautiful and intelligent women that I have known. It is a humor to be interviewed by her. When you are with someone who is mature, you love them differently,” Bruno K said.

Just when we thought it was a simple complement to the mother of two, Bruno K took it further as he hit the studio to record a song about their love in a song he titled Faridah.

In the song, Bruno K claimed that he had lost hopes of finding true love but Faridah made him believe in love again.

“I have met many people, I have moved around the world, but you are an angel, I have always failed to sleep but after meeting you all that ended. But baby you helped me a lot, you accepted to be my lover, you saved me from teddy bears who just seat on chairs. Faridah my lover, you are my one true love, I have lots of love for you,” the singer sings in some verses.

Is there any doubt?

Video: Panic in town as 4 Chinese Nationals are isolated, with signs of Corona virus