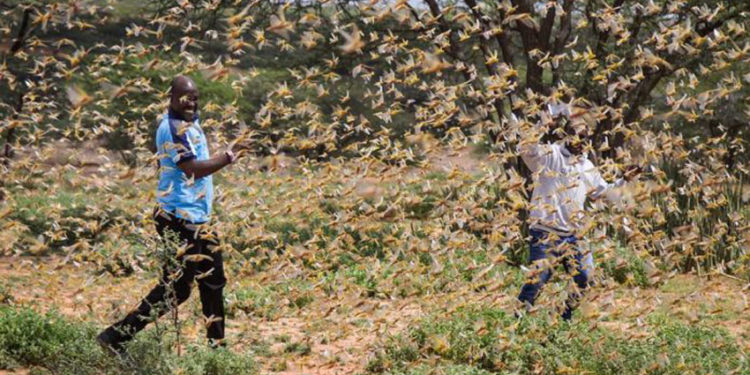 The use of pesticides in bid to fight the growing swarm of locusts in the eastern part of the country has been questioned by parliamentarians.

This followed presentation of an update on efforts to combat the desert locusts. The update was presented by the Minister of State for Agriculture, Aggrey Bagiire on Wednesday, 26 February 2020.

Bagiire said that one of the major mitigation plans of the government was to spray pesticides in the 25 districts currently affected.

However, MPs were concerned with the toll the chemicals used in the pesticides will have on the environment and crops.

John Baptist Nambeshe (NRM, Manjiya County) asked the Minister whether the pesticides used do not pose a threat to the people and animals likely to consume the crops and vegetation in the affected areas.

Kitagwenda County MP, Abbas Agaba said the government seemed to have no plausible plan for biological control of introducing another organism that would eat up the locusts at a rate faster than they are.

“Are these pesticides biodegradable; are we safe because some people are going ahead to consume the locusts that have been killed?” he asked.

Asuman Basalirwa (JEEMA, Bugiri Municipality) said that there were complaints from bee farmers that the chemical used in the kills bees.

“Did the government do sample research before it rolled out these chemicals?” he asked.

Minister Bagiire said that the chemicals being used which include pyrethroid and fenitrothion have been approved by local and international pesticide regulators.

“The chemicals are carefully prepared with low concentration amounts to ensure that there is no consequence on the environment and the people,” he said adding that, “the chemicals biodegrade within a period of seven hours”.

Bagiire added that the biological method of dealing with the locusts known to the Ministry is the use of ducks, a method used by the Chinese.

“We do not have the capacity to deploy over one hundred thousand ducks from China,” he said.

The locusts that are reported to be in 25 districts in the regions of Acholi, Sebei, Karamoja, Lango, Teso and Bugisu.

The largest swarm of locusts are said to have entered the country from Kenya and have invaded Soroti.
The Desert Locust Control Organisation for Eastern Africa has provided one plane for the aerial spraying of the locusts but the pesticide to be used has not been procured.