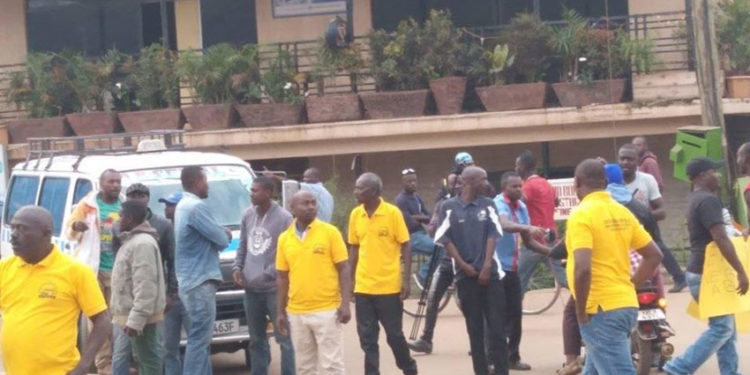 More than 300 people on Thursday took to the streets of Kabale town as businessmen, Boda Boda operators, vendors and taxi operators held one of the biggest strikes against Uganda National Roads Authority (UNRA)’s plans to stop taxi’s from operating within a road reserve.

The strike that started at around 7am saw taxis staged in the middle of the roads to block any movement, forcing travellers to walk. Movement of motorcycles and vehicles from Kabale town to Mbarara was also limited, with strikers demanding that UNRA officials, along with the municipality officials settle their issues.

Travellers who had booked early buses had to wait until the strike was called down, while others had to abandon travelling.

The Kabale UNRA branch had gazzeted a road reserve along Mitchell road that was being used by taxi operators. The road reserve was being used upon being transferred from their original taxi park due to ongoing construction of the multibillion markets in Kabale town.

Muhwezi Katabazi, the chairperson of the Kabale Taxi Operators told Watchdog Uganda during the protest that they had nothing left to do than to protest, because they were being pushed away from town, yet they needed money to cater for their families.

“There was no need to teargas anyone here. We didn’t intend to hurt anyone. Our main reason of protest was to oppose their unfair judgment. Pushing us from town yet they need to taxi us at the end of the month wasn’t a deal,” Muhwezi was quoted.

Police in intervention teargased the protesters until they were overpowered.

Allen Kagina, the executive director of UNRA through Sentaro Byamugisha the Kabale Municipality Mayor ordered the Kabale UNRA Branch to open up the gazzeted road reserve for taxi operators to use.

Patrick Besigye Keihwa, the Kabale District Chairperson criticized the Kabale UNRA office, saying they had engaged them to use road reserves in the period when market upgrade was ongoing in Kabale.

Darius Nandinda, the Kabale Resident district commissioner urged taxi operators to remain calm, and promised to engage UNRA such that broken and other stake holders such that whatever was destroyed during the protest was replaced.