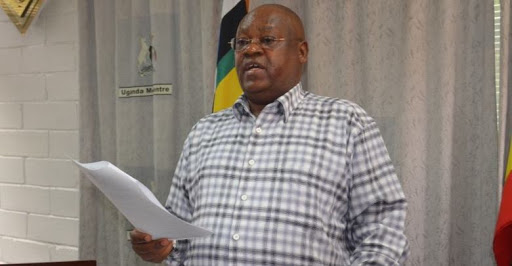 The Deputy government mouthpiece Col Shaban Bantariza has warned leaders of ‘People’s Government’ not to use the International Criminal Court (ICC) to fight their political struggles in Uganda.

In an interview with this website on Tuesday in Kampala, Col Bantariza said that everybody is subject to the law and if the People’s Government wants to go to the ICC, they are free. He, however, he said their agenda is only for political reasons.

Col Bantariza’s comments follow the declaration of People’s Government that preliminary filling of the cases of abuse of human rights and massacre against President Museveni and his allies such as Gen Elly Tumwine and Lt Gen Peter Olwelu have commenced in the ICC in The Hague.

The revelation was made on Monday by their spokesperson Betty Nambooze during the press conference held at their office Plot 6 Katonga Road.

Nambooze said that at the moment their first group of the team of lawyers led by counsel Fred Eddie Mukasa Lugalambi last week arrived at The Hague in the Netherlands to meet their international lawyers to the coordinate with other stakeholders to carry out preliminary proceeds before filling the major petition.

“We expect another team of other lawyers and politicians to travel to The Hague in the few days to come. In our petition, which is ready for filing, we are petition the ICC prosecutor, undertake the processes of the ICC, Act leading to the indictment of Mr Museveni and his colleagues for abuses of Human Rights, killings and torture on that am also a witness, however, the signing on the petition is going on, even as we pursue the case at Hague,” said Nambooze.

However, Col Bantariza asked them to be serious since ICC was not formed to help people in their political struggles.

“Now if you want to undertake political struggles in ICC and you think you are going to achieve it by legal gymnastics, that’s then amusing.  I thought people like Lukwago who is a lawyer knows that certainly this is s futile exercise of trying to fight politics in the ICC,” he said.

He added that as a Ugandans who were part and passion of the patriotic struggle to see that Ugandans get their freedom, liberty and rule of law, he can say that is fine for them to go to the ICC since no one is above the law.

“Actually people who are taking up that direction of looking for signatures to take anybody to the ICC, we are proud of that, because it’s us who created that possibility that makes it easy for them to do that. Previously no one could do that and stay, however since they can do that it’s a confirmation that we brought the rule of law they always enjoy and they can use it against us which fine,” he said.

He added; “Taking a political struggle in Uganda to the ICC, and you think you are going to win it, it’s purely puzzling because first of all, The Rome statute under which the ICC operates authorises or empowers only three entities to refer cases to the ICC that is United Nations (UN), the state and the prosecutor herself. But these other, people just go there and say we have a problem with some evidence and say can you kindly prosecute so and so. Then the prosecutor will go there and start her own investigation. In whose favour that one ends, we shall see what will happen.”

Col Bantariza expressed his gratitude that although the people’s government are accusing them of abusing human rights and murders, they have established a foundation that has allowed them (people’s government) to enjoy all those rights such as rule of law.

Ugandans who been taken to ICC

Ever since Uganda signed on the Rome statute, only three Ugandans have been indicted into this court this was due to the increase of crimes against humanity, by LRA. And in December 2003, the state handed over the matters to ICC and warrants of arrest were issued in 2005 for;

Joseph Kony who was indicted on 8 July 2005 on 12 counts of crimes against humanity and 21 counts of war crimes with regard to the situation in Uganda.

The second was Dominic Ongwen and was indicted on 8 July 2005 on three counts of crimes against humanity and four counts of war crimes in regard to the situation in Uganda. He was allegedly a military commander and a member of the leadership of the Lord’s Resistance Army (LRA), an armed group which has been waging a guerrilla campaign since 1987 against the present regime.

The third is Vincent Otti was indicted on 8 July 2005 on 11 counts of crimes against humanity and 21 counts of war crimes in regard to the situation in Uganda. He was allegedly a military commander and the second-in-command of the Lord’s Resistance Army (LRA).

The fourth would have been Raska Lukwiya however proceedings against him ended in July 2007 following his death on 12 August 2006.