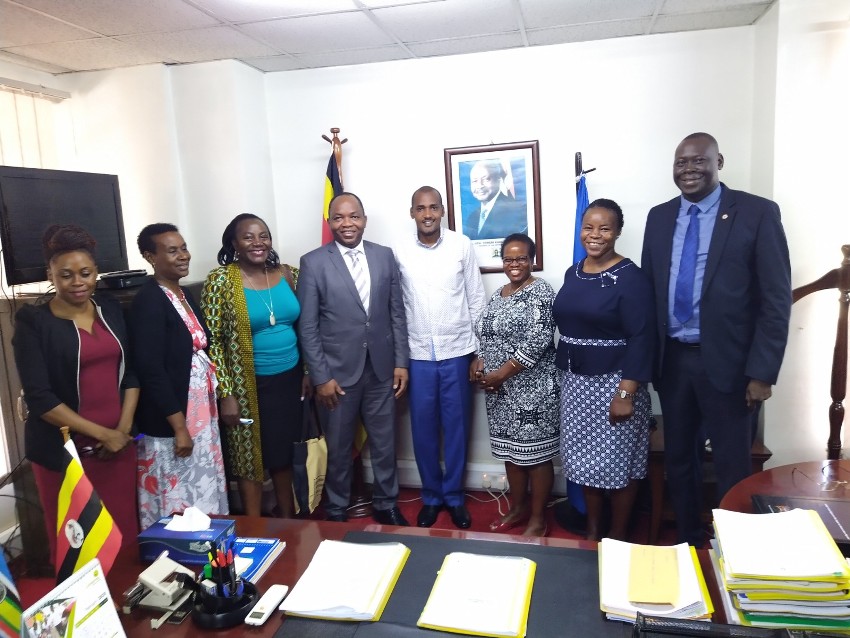 UN Women Country Representative, Dr. Maxime Houinato and Minister for Gender, Labour and Social Development Frank Tumwebaze after the meeting at the Ministry headquarters on Wednesday

A delegation from the UN Women Country office in Kampala paid a courtesy call to the Minister of Gender, Labour and Social Development, Mr Frank K. Tumwebaze during which they discussed issues pertaining to the fight against Gender Based Violence (GBV) and the need to strengthen reporting on social development interventions.

The UN Women team, including respective programme officers, was led by the Country Representative, Dr. Maxime Houinato while the Minister was flanked by the acting Permanent Secretary, Mr Ebitu James, the Commissioner Gender and Women Affairs, Ms Angela Nakafeero and her assistant Ms Margaret Kyomukama.

The Minister called for renewed energy to fight GBV in society noting that the vice is prevalent although cases largely go unreported for various reasons.

“GBV is real due to push factors like alcohol abuse and unfaithfulness among partners which has been escalated by technology adoption” The Minister said, adding that there is need to strengthen law enforcement and mind-set change among the populace.

He also called for a review of how job opportunities can be quantified with investments in the social development sector.

“Budgets must create jobs. Every public investment project should be subjected to a tool to establish what jobs are being created,” he observed.

Dr. Maxime commended Minister Frank K. Tumwebaze for his vision saying it was forward-looking and with potential to cause impact.

He revealed that half of UN Women’s intervention in Uganda is in the area of fighting GBV and violence against women.

He decried the high cost implications of GBV and warned that it denies the communities much-needed development projects.

“Uganda is incurring over Shs 77 billion in cost or opportunity costs in managing violence against women. This is a huge cost which could go into various development projects,” Dr. Maxime noted.

He also emphasized the need to tackle GBV through a behavioural change approach.

On the investment in social development interventions, Dr. Maxime decried the low value accorded to it and urged for increased lobbying to change the status quo.

“We want people to be used to investing in the sector without thinking that it’s too much for Gender.” He noted.

The Minister and the UN Women team agreed to have a follow up meeting where partnership in the areas discussed would be concretized.

Men need more than sex in a relationship