Release other Rwandans if Kampala-Kigali tensions are to be solved, says High Commissioner Mugambage 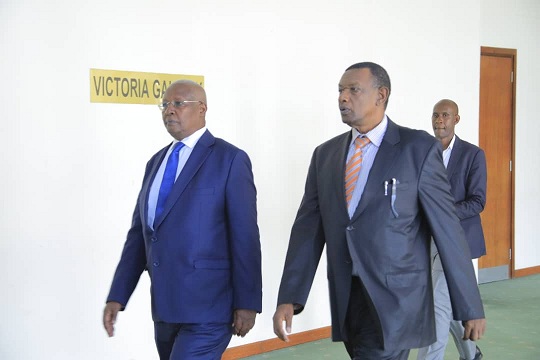 Rwanda’s High Commissioner to Uganda, Maj Gen Frank Mugambage has asked Ugandan authorities to stop arbitrary arrests of his countrymen and demanded the immediate release of other Rwandans who are still detained in Uganda.

Mugambage, who was addressing journalists on Wednesday at Serena Hotel Kampala during the official sending off of the nine Rwandans whose charges were withdrawn by the court-martial on Tuesday, appreciated the move by government but asked them to stop unlawful arresting Rwandans.

“And so with the request in good gesture, all those that are under illegal detention, should also be released. Not only that, but the whole act of arbitrary arrests must end right now, it’s ending the whole bad business,” he said

Mugambage told Kuteesa that even in recent times, he received calls from Kigali after some Rwandans were arrested on Sunday.

“So the principle of arbitrary arrests must be put to end in order to end all unnecessary tensions between the two countries,” he said.

He added that he has been following lawyers representing the newly released Rwandans and they had mentioned that there was no evidence provided for the cases that were raised against them although they have been held for quite a long time.

He also asked Ugandan authorities to stop preaching a negative image about Rwanda as a nation.

“We also need you to put an end to the support provided to the negative elements against Rwanda, this has been talked about at all levels,” he said.

In reaction to Gen. Mugambage, Minister Kuteesa affirmed that the nine Rwandans had committed crimes and the charges they held for were not arbitrary but their charges were withdrawn on the basis of goodwill which they think will be reciprocated.

On the issue of releasing other Rwandans, Kuteesa said that they have a list that they were given in by the Rwandan government and many have been dealt with by deporting them to Rwanda through legal means.

“Many of them have been sent back and we are doing this an open action to settle basically tensions between our two countries. The law will take it’s own course. This is the first step we hope that Rwanda also reciprocates these acts of goodwill,” he said.

He also noted that the releasing of the nine Rwandans is the product of the meeting between Uganda’s High Commissioner to Rwanda and President Paul Kagame.