She no longer picks my calls! Full Figure cries like a baby as Gen Nalweyiso refuses to give her money from Museveni

by Mubiru Ivan
in Entertainment, Showbiz
16 1 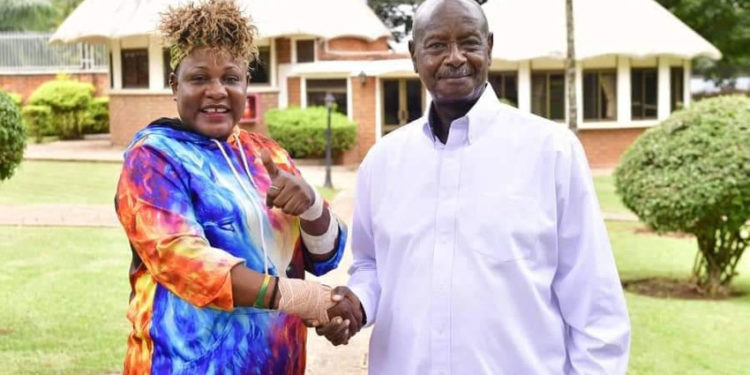 Presidential Advisor on artistes and youth affairs Jennifer Nakanguubi alias Full Figure has cried out to President Yoweri Museveni to deal with his aides who refuse to extend financial support to his needy supporters even after getting affirmative orders from him.

She disclosed that currently, Lt Gen Proscovia Nalweyiso, one of Museveni’s aide and military advisor at State House no longer picks her calls simply because Museveni ordered her to accord her some financial support.

“Some people close to the President are bad hearted.. Some are even annoyed with us. They think we overshadowed them in the face of the President but the good thing with me I still talk to them,” the faded singer said.

“Our bosses in NRM are bad, we worked for the party but they have refused to appreciate us.. The President orders them to give us something but they refuse to honour his orders. I think the word order from above no longer works in Uganda,”she added.

Full Figure further asserted that the ruling party bosses used her and her fellow  mobilisers during the 2021 elections but after achieving their goal, they dumped them.

” Some people in NRM used us during elections but now they nolonger consider us useful. Even after elections they brought some youths from Mbarara who claimed that they were the ones who campaigned for Museveni on social media during elections thus backsiding us.

On returning back to Bobi Wine’s National Unity Platform (NUP) opposition party after being disappointed by NRM, Full Figure claimed that it will never happen.

“No returning to NUP, despite facing challenges in NRM, I can never return to opposition.”