by Allen Kisakye
in Entertainment, Showbiz
22 1 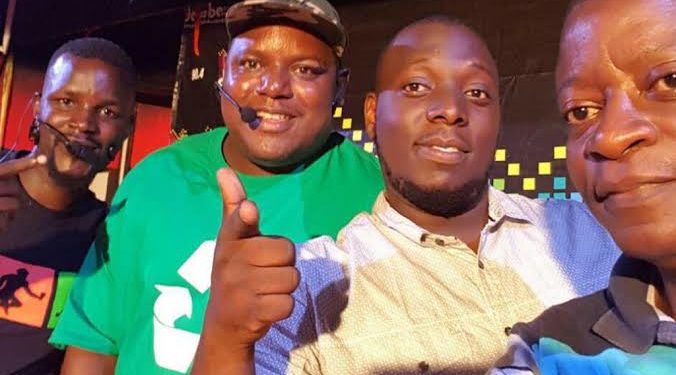 Dembe FM’s Isaac Katende aka Kasuku has added another nail in Mile’s Rwamiti’s social media pain, after exposing how the former Spark TV employee was caught cheating during exams.

Rwamiti has been going through a series of mockery following his 149 total votes score in the recently concluded Hoima Member Of Parliament race and one of the people who made a big deal out of Rwamiti’s defeat was Dembe FM’s Jenkins Mukasa.

But during an interview recently, Rwamit also retaliated and made fun about Mukasa’s ‘fat body’ size, advising him to watch what he eats or else go for surgery to have a weight reduction.

Mukasa wasn’t ready to let this slide and during their talk and talk show over the weekend, alongside his fellow co-hosts Kasuku and Eddy Sendi, he responded, saying that he has no time for a political failure (Rwamiti) who has no academic papers under his names.

Here is when Kasuku jumped in the conversation to defeat Rwamiti, and according to him, the former Koona show host went to UMCAT Institute the same period with him, and he acquired a Diploma in Journalism.

About what he remembers about Rwamiti’s school time, Kasuku narrated that UMCAT almost lost its Uganda National Business and Technical Examination Board (UBTEB) Registration Centre after an exam supervisor caught Rwamiti cheating exams.

As his fellows were busy thinking about the answers, Rwamit had sneaked a paper in the examination containing most of the answers, and the institute had to do a lot to prevent the worst from happening. He survived being expelled by a whisker.

Rwamit, declined to make a statement about this during an interview on Spark TV on Monday.

My family was tortured! ANT’s Gerald Karuhanga reveals why he lost in Ntungamo Municipality MP race

My family was tortured! ANT's Gerald Karuhanga reveals why he lost in Ntungamo Municipality MP race