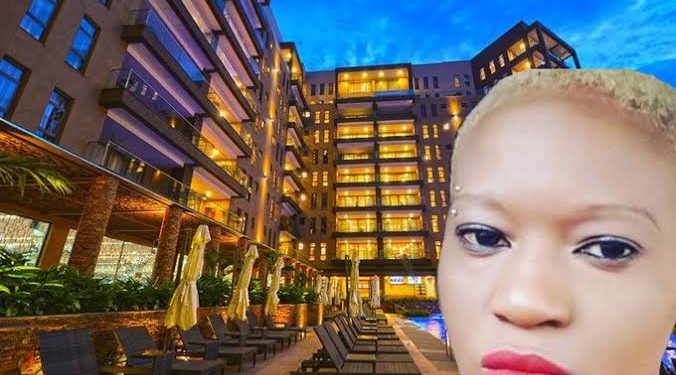 City socialite Sheila Don Zella, real name Sheila Nadege has been forced to take down her Facebook post in which she accused Speke Apartments of negligence, following an emergence of evidence punching holes into her allegations.

The struggling socialite, through her lawyers Semuyaba Iga &Co Advocates dragged the Wampeewo based Apartments to Court of Law, accusing them of negligence which caused her damages amounting to ShS46 million.

In the lawsuit, Zella stated that on 6th December, 2020, she rented two apartment rooms (R107 and R512) on Speke Apartments, but on Christmas day while she and her family members were away, a thief identified as Jeremiah Ojok who booked R110 broke into one of their room (R107) and stole her property worth millions.

And given this loss, Zella dragged Speke Apartments to courts, demanding a compensation of Shs461 million for damages caused.

However, in the footage making rounds on social media, Don Zella, her sister and the alleged thief  are seen heading to the former’s booked room 107 (where the alleged theft took place) a day before; which means if it’s true that her property was stolen, it was taken by her friends/family members.

Others believe that if it’s true that the money was stolen, Zella should provide proof that she indeed earns that amount of money in the United States of America through proof of paid up taxes.

It is also said that Don Zella was not even registered as having booked into the Apartments, among other points of concern.

But before she could clarify on this, the socialite immediately took down the post…and hopefully she will come out to throw more light on what really happened.

SAM EVIDENCE ORIKUNDA: Gen Muhoozi has enough intelligence information he can use to put Bobi Wine down, but he doesn’t want to fight him