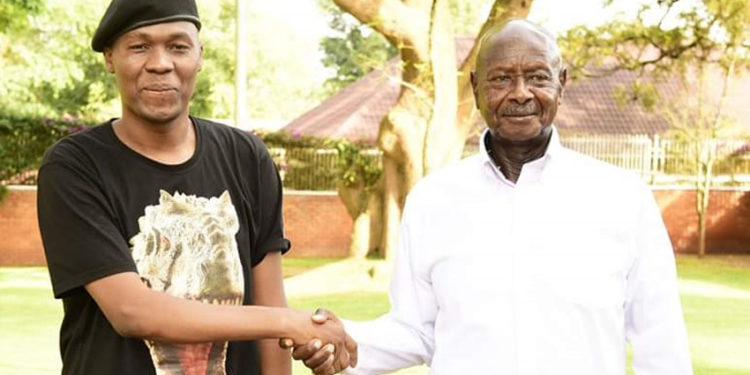 Its 14 days already but the President of Uganda, Yoweri Kaguta Museveni seems not bothered by the legal action singer Ibrahim Mayanja aka Big Eye filed against him.

Recently Big Eye claimed that he helped Museveni win the 2011 elections and he was supposed to be paid Shs400 million for his services but till now, he has not received any single penny even after remaining loyal to the ruling party- NRM.

After years of patience, the struggling singer gave Museveni and NRM an ultimatum of 14 days to pay what they owe him or risk being dragged to court.

After the elapsing of the 14 days, the singer is now planning to organise a press conference to reveal his next move.

“On 23rd June, through my lawyers, I sent a demand notice to the National Resistance Movement and Mr Yoweri Museveni (The Chairperson of NRM) and it was received. Its now only I day remaining to end the fourteen days. On Wednesday 8th July 202, I will hold a Press Conference at 32 Records, Salaam road to give you more details and my next step,” he shared on Sunday.

The said presser was initially supposed to happen on Monday (being the last day of the 14 days notice), but for some reasons, the conference was postponed to Wednesday.

Although we are not sure if Museveni will be shaken by what Big Eye will be saying in that press conference, some of the singer’s fans advised him to go to court instead of a presser, others just mocked his ‘pain’, saying that the conference will be postponed till next year for he looks more scared than Museveni.

Naka Boss. Even on Wednesday it will be postponed till next year. You seem to be scared more than the people you sued… you will be fine

Paula Birungi. Hahahaha why postpone, and why do you need a press conference? Just go to court, the 2 weeks are over haha.

Nelson Waloze. First explain the meaning of the word breaking in the photo above.

Barbara Patience. We know how the movie will end. Balaam will come with a box.

Twinson R Benson. Is this breaking news?? Ugandans you like being relevant so much.

Anzo Nard. We shall take you to the mental health care unit soon. Ugandans think you’re fine but you’re not doing okay now.

Solomon Khan. The president is till having some issues. They stole his land. But Bigeye. Kapiripiti the rapper is working on construction site just at a teen age to make ends meet though its illegal.