by Catherine Apolot
in Entertainment, Showbiz
53 0 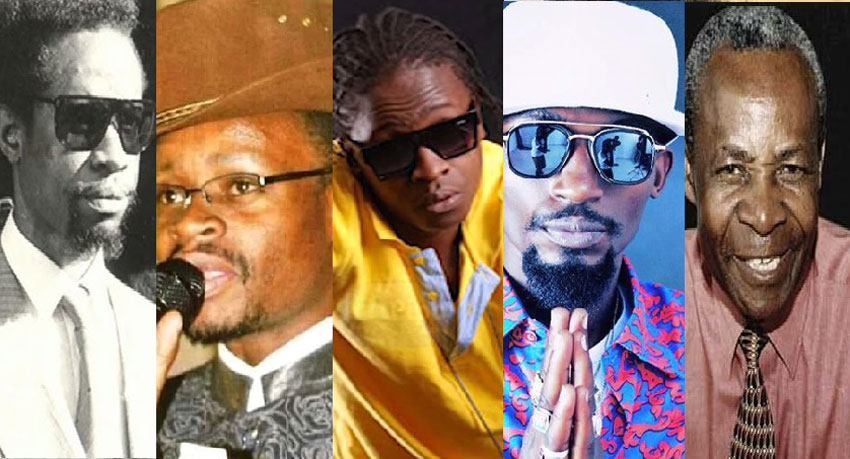 Uganda’s musical landscape has been crowded with people who claim to sing. Most are still around and pick a cheque every once in a while. Others, legends, have, however, gone to live with the angels. Here, we present a list of some musicians who left a legacy due to their contribution in the music industry.

Born on December 5, 1958, Basudde made his mark in the early 1980s.  He became popular for his songs such as Mukyala Mugerwa, Baasi Dunia among other songs about mischievous love affairs, philandering husbands, and bizarre witchcraft. But death caught up on him in 1997 at Kabaale, Bugonzi in a car accident while travelling to his parents’ house in Masaka.

Kafeero was born on July 12 1970. A gifted lyricist, Kafeero was famed for his story telling in songs such as Buladina, Walumbe zaaya, Depot Najigala, Olulimi Lwange among others. Acute fever claimed his life at Mulago Hospital on May 17, 2007.  Several artistes covered his songs to keep his memory alive.

Nicknamed ‘Ever Green’ Wamala’s songs such as Ani yali amanyi, Lowooza Kunze, Nabuto made him a celebrated musician of all time. When he died of throat cancer at Mulago Hospital on August 22, 2004, the arts fraternity came to a standstill, but not his legacy. Like Kafeero, several artistes redid some of his songs.

He was born on October 19, 1951 and died on December 15, 1989 at Nsambya Hospital. He studied at Kololo Senior School, and was the first musician to give a human face to HIV/Aids. Although he had numerous records to his name, Lutaaya is best remembered for the HIV/Aids themed song, ‘Alone and Frightened.’  His discography involves a Christmas album, ‘Merry Christmas’ that included songs such as such Merry Christmas, Katujaguze, Zukuka, Tumusinze that are played to date in many Christian families during the festive season. Fans and music critics alike are still divided on whether he is the greatest musician from Uganda ever.

Herman Bassude’s mentor and friend, Kasozi is another celebrated Kadongo Kamu musician. His albums Dunia Weraba, Abafumbo Twefubirire, Kandebere Mudondo had eye-opening songs. Unfortunately, just like Lutaaya who had died eight years earlier, the country lost him to HIV/Aids in 1997.

A former member of the Eagles Band, Maiso died on February 13, 2012 at the age of 46 at Mirembe Hill Clinic, Najjanankumbi, Entebbe Road. It is believed his death came about just three days after a dentist had extracted three teeth at once, causing unbearable pain. Apart from Ekimuli Ekya Looza, Maiso is remembered for other songs such as Tawaza Yange, Ebyekubo, Jjangu Ofumbe, Choice, Eric, Nsangi, Ndi Bulaaya, Bakulimbalimba, Abantu Bazibu, Baleke, Biveeko.

He is referred to as ‘grandfather’ of musicians for he recorded the first Kadongo Kamu song, Omukazi Malaya in a first class studio in 1955; Born 1929, Sebaduka was the main act during the opening of the National Theatre. Popular for his songs such as Tereza Ow’ebina edene, Nantondo andEddame lya Chwa, Sebaduka is credited for having started the Kadongokamu Cultural Society and was one of the few musicians to perform on Independence Day at Kololo Airstrip.

Formerly of Iro Stars Band, Birungi reportedly died in the house of fellow musician Kafeero in Maganjo. Friends say she started complaining of heart complications immediately after lunch and went to rest. Only to die in her sleep on June 11, 2002. Other reports say the Okukula kweta star lost her battle to HIV/Aids. A year earlier, she had survived an accident while returning from a show. Her other songs include Mwami and Gyamu empeewo.

Fred Hannington Masagazi Muwonge, died on March 2, 2009 aged 72, died at Mulago Hospital after a short illness. Masagazi, an Afrojazz musician, started his musical journey in 1955, later founding the UK Jazz Band, in 1963. That same year, he became the first Ugandan to have his song – Kalazizo – played on BBC. The breakthrough literally opened doors for Masagazi, and other musicians who started travelling to Kenya to record songs. He is also remembered for songs such as Atanawa Musolo, Nkola zange, Olupapula simupiira.

Starting out as a singer of gospel music in his early years, Katumba rose to fame as the country’s premier pop star from late seventies to the nineties, according to Wikipedia.  With his band, The Ebonies, the musician, usually equated to Jim Reeves, played a definitive role in changing the shape of popular music in Uganda.  Katumba started his music career as an eight-year-old singer in Mukono church of Uganda where his father, the Rev. Blaiso, was a preacher. He died in August 13, 2006 at Mulago Hospital, after releasing songs such as Twalina Omukwano, Ebasa, Ekintu Kyolina, Oli Mufumbo, Kinawatakaamong others.

Emmanuel Mayanja aka AK47 was born on June 19, 1990 and died on March 16, 2015. At his very tender age, he was one of the best Dancehall musicians at the time. He rose to fame in 2012 with his song titled Champion. As the last born of the Mayanja brothers – Jose Chameleon, Pallaso and Weasal – AK47 managed to hold his own before his mysterious death at DeJavu bar in Kansanga, a Kampala suburb. Usiende, Bayunda (Remix feat. Chameleone), Kidandali, Mbera ya nsi, Mussajja watu with King Saha, Ndi Mulokole

Popularly known as ‘Sera’, Nampijja was a great musician and song writer signed under Swangz Avenue. She rose to fame in 2012 with her song titled Contagious. Her other songs such as Fire and Sunshine also gained considerable airplay in night clubs and on radio.  Born on June 8, 1990, Sera died on July 28, 2012 due to Stomach Ulcers after developing complications on her way from Masaka where she had traveled to bury the father of her music producer Ken.

Kisakye rose to fame when she released a song called ‘Gyenvudde’ which earned her a deal to perform at Presidential candidate Kizza Besigye’s campaign rallies in 2006. Celebrated for her songs such as Ekinaigeria, Ebintu Tubilye, Omulamuzi, Sentala, Kisakye died of stomach and kidney complications after she had been hospitalized at Mulago National Referral Hospital for about two weeks. She was 35.

Radio’s voice still resonates with fans of all age groups. From‘SweetLady’ and ‘Jennifer’ released as an upcoming solo artiste under Leone Island about a decade ago, through hundreds of released and unleased songs, up til his last known hit, ‘Tambula Nange’, Radio, who died on February 1, will forever be remembered as the finest, complete musician of this generation.  This former GoodLife member who met his death at Case Clinic after sustaining a hit on the head, was not only a prolific singer, but wrote countless songs for himself and other musicians. Upon his death, comparisons between who was better – between him and Philly Lutaaya- came up. That’s how he was regarded, that he was placed or even compared to the legendary Lutaaya who had passed on almost three decades ago.