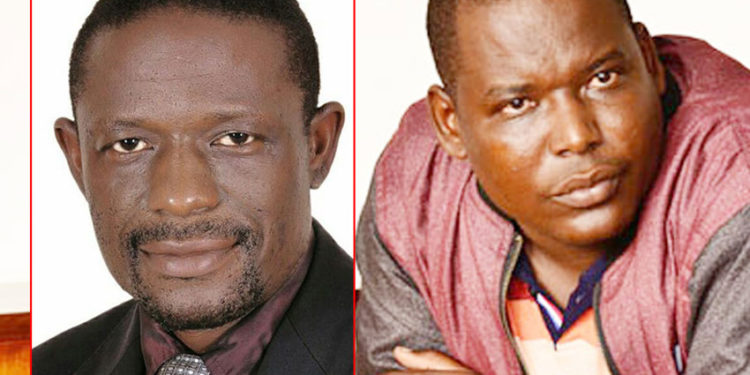 Events promoter Andrew Mukasa alias Bajjo of Bajjo events narrowly survived death in Kamwokya when an angry mob descended and beat him up on Saturday 30.

Bajjo has been known to many as an ardent People Power defender, a reason for which he alongside his close partner Abbey Musinguzi aka Abtex have spent nights in prison on a couple of occasions.

” Chairman Nyanzi Fred Ssentamu and his goons have attacked me in Kamwokya, my car was damaged and he is threatening my life, reason being that I have said I will not be supporting Bobi Wine’s brothers. Thanks to the local people who rescued my life. I have reported two cases of Malicious damage and threatening my life at Kira Road Police Post. You can see the person who wants to be a Member of Parliament.He is very violent. How can you be violent and also want to be a leader?

This is a lesson to you Nyanzi. I am not violent like you.I am a law abiding Citizen but I am going to deal with you smartly because your weapons are; violence, damaging people’s lives and fake propaganda. I repeat for the last time that I will only support Bobi Wine but I will not support his brothers.” Bajjo wrote on his Facebook page after the Saturday incident.

Even though Bajjo pins Nyanzi on ordering the mob to assault him, an eye witness account differs. We have learnt that by the time of the incident, Nyanzi was inside the Firebase building when loud voices started tearing through. A group of people outside the building and those in the streets had rounded up Bajjo and accused him of spying on people power and it’s leaders.

They had started beating him and damaging his car until Chairman Nyanzi ordered them to stop and cautioned him to stop coming to the place since people had demonstrated that he was unwelcome.

“Chairman Nyanzi only came to save him. He hadn’t even known who was being assaulted at first by the time he came to the scene. But he told the boys to leave him alone. He told him never to comeback to Firebase since people could kill him and for him he interpreted it as a threat to his life,” An eye witness told this website on condition of anonymity.

Meanwhile, there are some underlying secrets that have not been known to the public that could have abruptly erupted into the ugly incident of Saturday at Firebase offices in Kamwokya.

Bajjo’s recent actions have attracted a lot of suspicion from supporters of People Power who no longer trust him. They had suspected him of being a spy working directly with NRM’s Balaam Burugahara who is on mission to poach supporters of the pressure group to NRM, with Ashburg Kato being his latest prey.

For these malicious accusations, People Power die-hards in Kamwokya and the country at large had not forgotten nor forgiven Bajjo but only waited for an opportunity to emit their rage, which presented itself on Saturday.