by Mubiru Ivan
in Entertainment, Showbiz
213 2 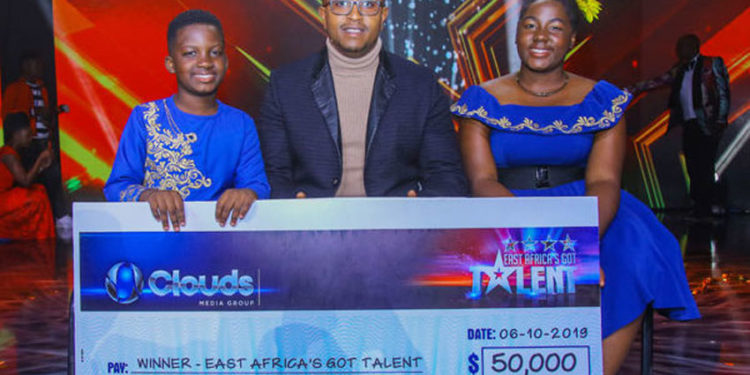 It was all smiles last year in October as 12-year-old Ezekiel Mutesasira and his 14-year-old sister Esther Mutesasira won the inaugural East Africa’s Got Talent (EAGT) competitions in Nairobi, Kenya.

The duo was supposed to walk away with a grand prize of USD50,000 (Shs184 million) after defeating the other finalists who included, Intayoberana (Rwanda), Jannell Tamara (Kenya), DNA (Uganda), Jehovah Shalom (Uganda) and Spellcast (Kenya).

Days after achieving the milestone, Ezekiel said that he will first give tithe to God, Build a home for the disabled and orphaned children and use the remaining money to process the required travel documents to Canada, to visit his mother Julie Mutesasira, a renowned gospel singer.

But guess what? Four months down the road the talented youngsters are yet to receive a penny from the organizers.

This was revealed by Esther and Ezekiel through their official Facebook page a few days ago.

They said they were beyond frustrated over the delay in payment of their cash prize.

“Hey Beloved ones, we are beyond frustrated, l am writing this to seek speedy resolution to the delayed release of East Africa Has Got Talent $50,000 cash prize that was supposed to be given to us the winners! Don’t get me wrong it’s been such an amazing experience very humbling meeting the president, inspiring other young kids and all the amazing people we’ve met along the way,” the Mutesasiras said.

They further disclosed that since October last year, no one from EAGT has ever reached out to them over the payment issue.

“While we appreciate the platform EAGT gave us, it’s their duty as well to fulfill the promises, This is a serious concern to us as the funds are delayed, no one from EAGT has reached out like you recall, we promised to donate some of the money to different charities and wouldn’t want to make empty promises! Sorry we had to shade some light on this. Guys what do you think we should do?” Ezekiel and Esther inquired.