by Mubiru Ivan
in Entertainment, Showbiz
19 1 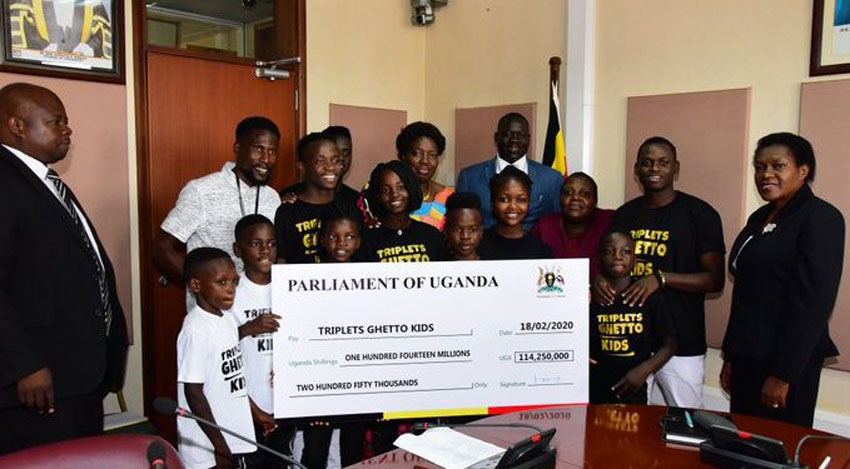 Ghetto Kids with the Speaker of Parliament Rebecca Kadaga on Tuesday

It is all smiles for the talented dance group- Triplets Ghetto Kids after receiving Shs114 million from Members of Parliament in a bid to save their house.

Led by their manager Dauda Kavuma , the group has on Tuesday morning met the Speaker of Parliament Rebecca Kadaga who presented them with a cheque worth Shs114,250,000.

According to Kadaga, the group will use the Shs100 million to clear their house balance and Shs14,250,000 to finance their day to day activities.

Last year in December, legislator heeded to Kadaga request to raise shs100 million for the young performers to pay off a balance on the house they had purchased. The house acts as their residence and also training centre.

Kadaga made the request after the Ghetto Kids put up an energetic performance at the Parliament end of year party for the members and staff.

The group, which has featured in music videos by international artistes French Montana, Chris Brown and Eddy kenzo were on the verge of losing their house after failing to pay the balance of Shs102 million. They had purchased the Makindye based house at a fee of Shs210 million.

They had so far paid Shs108 million with a sale agreement between Inspire Triplets Ghetto Kids and Mansur Ssekatawa made on October 5, 2018 in which Kavuma paid an upfront sum of Shs90million. He later on paid Shs18million in March 2019.

In November 2019, Ssekatwa, the landlord threatened to repossess the house if Kavuma does not pay the Shs108 million balance by December 31, 2019.

Government scholarships: Education Ministry on spot for ‘favouring’ students from particular parts of the country