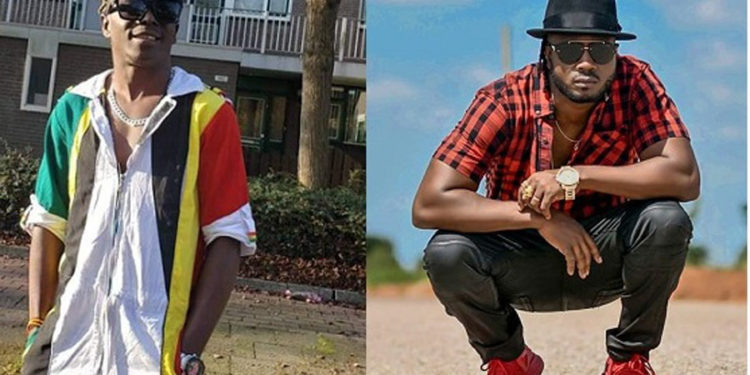 Singer Mansur Ssemanda aka King Saha has been trolled on social media by his fans for failing to take advice from fellow singer Bebe Cool.

Recently during an interview, Bebe advised Saha to stop taking drugs for they are killing his music career and he might end up like former singer Jackie Chandiru.

“I care less about Saha’s insults but I’ll still advise him to be careful, I am older enough to know that is we don’t speak about something earlier, the worst might happen. Soon he will be like Jackie Chandiru and those who are supporting him to abuse me will be laughing at him,” Bebe Cool said recently.

But Saha was not ready to take any advice from Bebe, and on Tuesday through his social media platform, Saha released a list of most foolish artistes, including Bebe Cool and other artistes who ‘beg’ money from President Museveni.

He claimed that he first consulted some of his fellows before coming up with this list, little did he know that tables will turn bad for him following this list.

“After consulting other music stakeholders, this by far is the most accurate list that I’ve managed to come up with. My List for The Most Foolish Artistes of the Last Decade,” Saha noted.

But according to fans, Saha should ‘sober up’ and take advice from Bebe Cool instead of insulting him, if not, people close to him ‘Saha’ should check him into a rehabilitation center for he is currently turning into public nuisance.

Natta Kimera. I didn’t know you were this insane and stupid.

Kemmy Gagamel. Those are the words of drug addicts, you were just given advice, too bad that those who you think love you don’t tell you the truth. But Bebe Cool giving you advice was a sign of love not hate.

Leyton Bbaale. As the management of King Saha we want to inform the public that this account is not managed by this artiste but someone under the influence of marijuana and other unknown weeds, apologies.

Matovu Moses. But this time round bebe cool spoke the truth, Saha stop taking drugs and other weeds coz I used to see you at mulungu, just pick something from your elder’s advice.

Ahab Leonard. Now I didn’t know the use of drugs but now I see the outcome of what they call cocaine, but Saha you just have to take the advice, this is not the best way to approach this situation, I beg people near Saha to take him to rehabilitation center coz he is running mad.

Shina Nsubuga. But Saha don’t be too stupid, the truth is you’re talented but you have relaxed musically, did bebe lie? Abusing him aint gonna take you anywhere apart from creating hatred between us fans.

Dube Muyomba. The moment you will leave weed and concentrate on music I swear you will thank Bebe for that encouragement.

Ethan Jovan. But you’re becoming more foolish, you know the truth hurts, it shows how guilty you are bother.

Mercy. The hashtag remains, King Saha stop doing drugs, how can a man rant over one thing for more than a decade