By Allen Kisakye
Former Blu*3 singer Jackie Chandiru has turned to God for salvation following her her addiction problems and near death experiences.
Chandiru Joins fellow artistes Qute Kaye, Papa Cidy, Kapare among others to accept God as their personal savior at Rubaga Miracle Centre, Cathedral.
“Given what has been happening in my life,I sometimes cant believe that I am standing here. I promise to tell everyone that God is there, and I am also still alive because of him,” the ‘Gold Digger’ star said during Pastor Robert Kayanja’s ’77 Days Of Glory’.
Standing in front of the congregation, Chandiru confessed that she has had a lot of dark times in her life but promised to use the second chance that God has given her to be good person.
For years, Chandiru, who gained fame alongside Cinderalla Sanyu and Lilian Mbabazi as the founding members of an all girl outfit called Blu*3, has been battling a drug addiction for more than five years. On several occasions she has relapsed after spending several days in rehab.
She now believes that since some friend and family can genuinely stand by her, she too can give her life to Christ.

Ntungamo: NGO calls for government to revise its law

Kranium Healthcare system is the solution to Uganda’s health sector

Multi-award winning singer Edrisa Musuuza alias Eddy Kenzo has dismissed claims that he is the biological father of Britton Diamond... 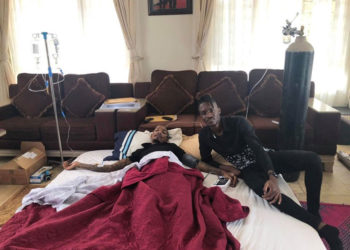 Singer A Pass has said that renowned philanthropist Brian Kirumira alias Bryan White, who is currently sick is in so...

Kranium Healthcare system is the solution to Uganda’s health sector