by Stephen Kalema
in Entertainment, Showbiz
0 0
0

Netizens especially those belonging to the Catholic church have condemned the management of the young rapper Fresh Kid real name Patrick Ssenyonjo for allowing him to use catholic priesthood vestments in his new video song called ‘mazima’.

In the video, Fresh Kid is dressed as a Catholic bishop with the Mitre on his head while some dancers are dressed in an outfit worn by nuns called the habit with a big cross as a rosary.

Some of the public members have seen this as the beginning of disrespecting the sacred religious vestments. They say entertainers should not involve religion in their ‘comedy’, saying that doing so, is a sign of disrespect.

Twine Charles the Officer in Charge (OC) of the Parliament Police division in charge of investigations through his Twitter handle called on the Uganda Communications Commission to start censoring songs in order to bring back the sanity and respect of the society’s sacred symbols. 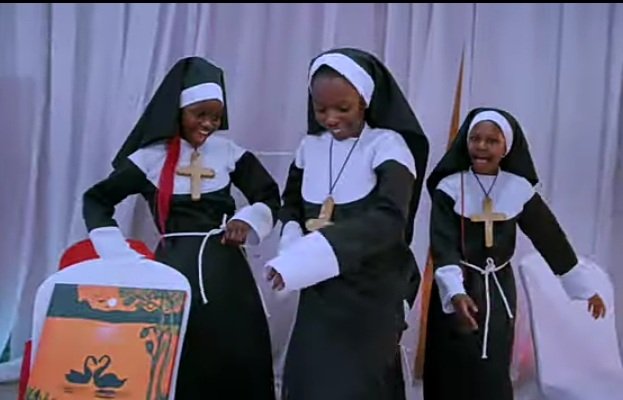 “I have watched Music Video of Fresh kid wearing like Bishops, with dancers putting on like Catholic Nuns, and am very disgusted with his managers. Such video should be censored with immediate effect because of it undermines the sanctity of the church, UCC and Uganda Police,” reads the tweet posted on Wednesday.

Emma Cos said, “This is a direct insult to the Catholic church and it’s really not acceptable.”

Raymond Jengo noted, “With all the intent and purpose, religion must be respected. Whoever is behind the young boy’s talent should think twice rather than being taken up by the positivist view on social media.”

Nevertheless, Fresh Kid is not the first artist to use Catholic priesthood garments in his artwork. In 2014 the Catholic Church asked Hillary Innocent Kiyaga, known by his stage name as Dr Hilderman to apologize for allegedly disrespecting church vestments when he donned them at the launch of his album.

Dr Hilderman performed in a Bishop’s cassock at the launch of his album at Hotel Africana, Kampala. Dr Hilderman later apologized to the church.