by Lawrence Kazooba
in Entertainment, Lifestyle
0 0
0

It is known that Dr. Sudhir Ruparelia, a Ugandan billionaire loves throwing parties. There is however one party which Asians who lived in Uganda before 1972, deserve to have. And the man himself, had one, with his friends and family.

Former Ugandan dictator Idi Amin must have looked on in disbelief seeing one of the little men he denied their right to grow up in Uganda, turn out to be the biggest boy not just on the dance floor, but, sits on top of Uganda as the country’s richest man.

Sudhir, a workaholic who also loves to live his life to the fullest, was among thousands of Asians deported from Uganda. Little did he know that someday he would be the richest Ugandan alive. God has been faithful – the chairman of Ruparelia group of companies has made it big in Uganda, and beyond since he returned from exile in the 1980s. 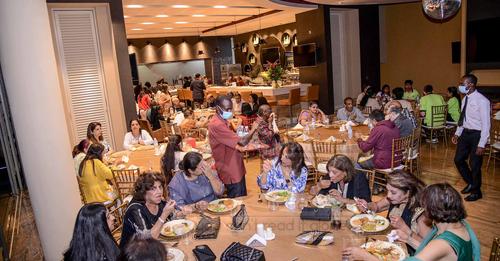 The party Sudhir threw to his Asian friends in Uganda and from abroad, is a typical irony of life, where one turns lemons into lemonade. Or dust into gold.

Sudhir who was born in Kasese and raised in Jinja, went to exile where he worked as a cab driver as he attended school.

Instead of enjoying life in London, Sudhir made a risky move to return to Uganda at the take over of President Museveni, starting out as a trader on Kampala road. The business has since turned into a multi-billion empire.

Today, the name Sudhir is synonymous with money, investments, property – most of the buildings are flagship Kampala skyline brands such as Kingdom Kampala, Speke Apartments, Speke Resort Munyonyo among others. But also, his legacy brand, Ruparelia Group, is one of Uganda’s biggest employers and taxpayers.

At his Ruparelia residence in Kololo, on August 4, Sudhir and his family ushered in their Asian friends including indigenous Ugandans such as businessman Ntaganda Ephraim and his long time journalist friend Andrew Mwenda.

Sudhir’s better half, Jyotsna, and now grown up children were in attendance.