Brighton, UK (CNN)The UK has a successor to the popular and iconic London Eye, only this time it is located in the seaside town of Brighton.

The 162-meter (531-foot) British Airways i360, which opens to the public on August 4, is the world’s tallest moving observation tower and also its Guinness record breaking slimmest thanks to a diameter of 3.9 meters (12.8 feet) and a height-to-width ratio of over 40:1.
After airport-style security checks, visitors enter the futuristic glass-and-steel pod and slow glide to a height of 138 meters (453 feet), an experience akin to floating in the air given the 360-degree views out as you walk around the cabin.
Unlike the London Eye, this is not about spotting skyscrapers or monuments (though Brighton’s West Pier, Royal Pavilion and many Regency-era squares from above is definitely a novelty.)
This time, it’s the way the city meets the countryside; how the intersection between sea and land is brought into relief; and the constant movement of the traffic, clouds, sea and sunlight that inspire awe. 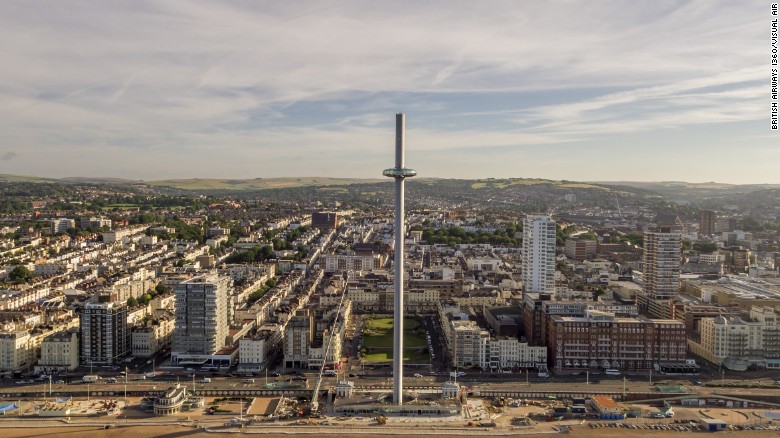 Conceived and designed by London firm Marks Barfield Architects, the designers behind the London Eye, it brings together the same crack team of engineers and manufacturers who worked on the famous wheel.
Though the i360 is often called a vertical cable car thanks to the technology it uses to drive the pod up and down, founders David Marks and Julia Barfield often refer to it as a “21st century vertical pier.” 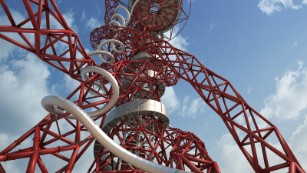 “In a way it’s doing the same thing as the pier. It’s providing a view,” says Barfield. “Going on the pier wasn’t necessarily about looking out to sea, it was about looking back over the city.”
This reference is all the more poignant given the tower’s location on the landward end of Brighton’s original West Pier. Built in 1866 — exactly 150 years ago — closed due to disrepair in 1975, and was almost entirely destroyed by fire in 2003.

In a project with countless challenges — from the complex task of building foundations on chalk bedrock to finding innovative ways of erecting the tower — the element that arguably required the steeliest determination was raising funds. 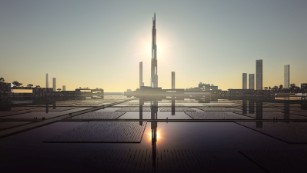 “I don’t think there are any bank, venture capital or private equity firms, or sovereign wealth funds I didn’t see,” recalls David Marks.
Things were proceeding well when it “all fell apart in 2008,” he continues.
“The Lehman Brothers collapse in September was the final straw”.
Eventually, in 2013, an innovative funding mechanism allowed Brighton & Hove City Council to lend the i360 £36.2 million ($48.2 million) of the £42.2 million ($56.2 million) construction costs from the government’s public works loans board, which can only be used for projects that show a financial return.
The profits on interest will be around £1 million ($1.3 million) a year, say the architects (who are 80 percent shareholders), and the council will receive 1 percent of all ticket revenues in perpetuity.
But more importantly, the architects believe the new attraction will lead to increased tourism and longer stays in the city, and could become “a catalyst for regeneration in a part of Brighton that was rather sad and scarred,” says Barfield.
Marks says the much-missed West Pier can’t be replaced, but this 21st century alternative will do its utmost to “delight, entertain and inspire.”
Source:http://edition.cnn.com/2016/08/03/architecture/brighton-tower-i360/index.html
Do you have a story in your community or an opinion to share with us: Email us at editorial@watchdoguganda.com