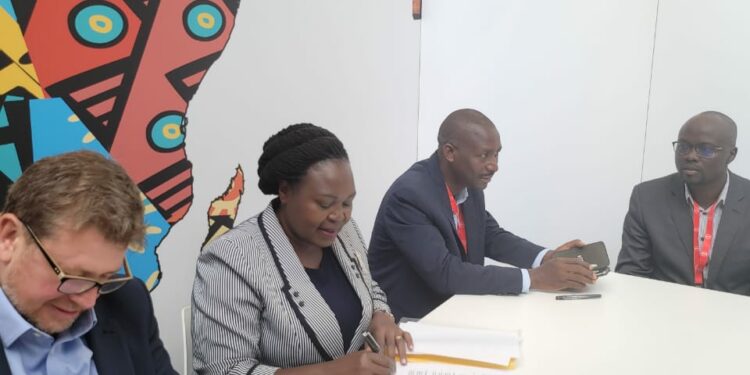 Gridworks and the Government of Uganda have agreed to develop a first-of-its-kind project to use private investment to support the development of the country’s electricity transmission sector.

The agreement was announced on Thursday by the United Kingdom Prime Minister, Boris Johnson at the Commonwealth Heads of Government Meeting in Kigali where he said that Gridworks will develop and finance the project – providing up to US$90m equity funding with Siemens undertaking the upgrade work on the four substations.

The project will consist of the upgrade of substations, to solve the capacity constraints at 4 key nodes of the grid and these include; Tororo, in the East, close to the Kenyan border, Nkenda, in the West, at the interconnection point to DRC and Mbarara & Mirama, in the southwest. And each node has been identified as a priority by Uganda’s national transmission utility (UETCL) in its latest Grid Development Plan.

Speaking during the signing, Kate Airey, UK High Commissioner to Uganda welcomed the agreement and termed it as one of the signals that are important in strengthening the already close partnership between the UK and Uganda. She said that Transmission infrastructure plays a vital role in boosting economic growth and enabling Africa’s clean energy potential.

“I’ve witnessed the important collaboration between Gridworks and the Government of Uganda that has led to this first-of-its-kind project to bring private investment to the transmission sector. This investment signals the continuing ambition of the UK to be a good investment partner to Uganda and to support its plans to deliver effective infrastructure for its people and businesses.”

Nick O’Donohoe, Chief Executive of British Investment International said the new collaboration reflects the spirit of “our ambition when we established Gridworks in 2019, as a platform that will work alongside governments and stakeholders to improve access to reliable least-cost energy in order to drive economic development”.

“I am thrilled by the progress achieved on this project through the partnership between Gridworks and the Government of Uganda. This first-of-its-kind transmission project will support productive, sustainable and inclusive growth in Uganda. It will also demonstrate a replicable model for further transmission investment in Uganda as well as other countries in Africa.”

“Our pilot project has taken several years to develop and will demonstrate that this model can be used to unlock critical projects. It will benefit households and businesses in Uganda and ensure that high-quality renewable power is available to drive economic development. There is a huge need for funding for Africa’s electricity networks. That need will be met more quickly if we create sustainable business models that attract private sector capital and expertise.”

The Minister of Energy and Mineral Development, Ruth Nankabirwa welcomed the agreement and said it is a pleasure to announce the pilot project with Gridworks that will bring new, private investment to Uganda’s transmission sector.

She noted that the Government of Uganda wants to promote a safe, reliable and sustainable electricity supply and facilitate stable regional electricity trade, therefore, increasing investment in the electricity grid will enable Uganda to unlock suppressed demand; boost industrialisation and power its export sector.

“The upgrade of these substations will enable us to supply industrial users with increasing amounts of power in line with the aspirations of the Government’s National Development Plan to improve the competitiveness of Uganda’s manufacturing sector. This pilot will be helpful in establishing a successful model that can be duplicated to catalyse further investments in the sector.”

The project will be the first of its kind in Uganda. It demonstrates the growing interest in private participation in the sector as governments look for complementary and alternative means to fund critical infrastructure.

According to the Ministry of Energy, Investment in the transmission sector is critical to realise the Ugandan government’s development plans. Network expansion, increased capacity, and increased resilience are necessary in order to ensure that power generation is effectively delivered to customers.

The improvements also are expected to enable UETCL to allow the evacuation of power generated to supply large industrial customers and provide adequate capacity to support regional trade in the East (Kenya) and to the West (Democratic Republic of Congo, Rwanda and North-West Tanzania)

According to World Bank figures, from 2010-2020, only 7.5 per cent of global private electricity infrastructure investment was targeted at sub-Saharan Africa. Of this, 98.2 percent funded electricity generation projects, with less than 0.3 per cent funding transmission projects. Therefore, Gridworks wants private investment in transmission to be a recognisable asset class in Africa.

Businessman Sudhir puts his magnificent One-10 Apartments up for sale