by Lawrence Kazooba
in Agriculture, Business
3 0 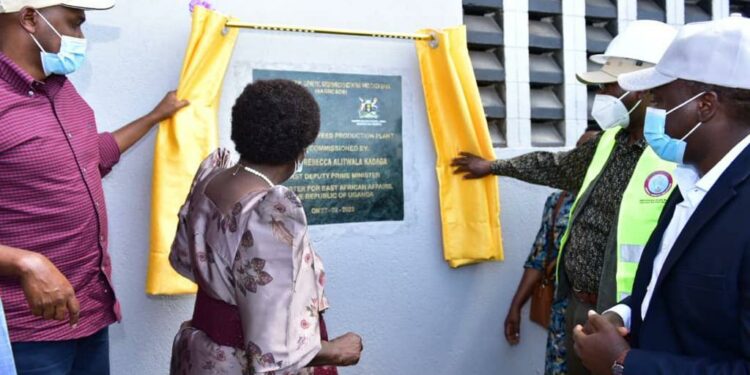 The new facilities will improve livestock production and productivity in Busoga sub-region through safe and affordable livestock feeds for sustainable agro-industrialization.

Kasolwe is one of government farms managed under NAGRC & DB that serves as a regional centre.

Kadaga praised NAGRC & DB management for providing farmers in the region with the best farming methods, right from providing the top breeds, trainings in farming as well as marketing farmers’ produce.

“I take this opportunity to thank Dr Beine and his team for upgrading Kasolwe into a modern ranch and advise the people of Busoga to utilize it to improve farming,” she said.

On his part, Tumwebaze said the mill will provide animal feeds to farmers in the region at subsidized prices.

“The mill will produce feeds for both the internal demand of NAGRC & DB, our breeding institution and selling to farmers at subsidized prices,” he said.

“With continued budget support from government, it’s our plan as the ministry to systematically revamp and equip all our regional and zonal research and breeding institutes. Quality seed and breeding stock are the Major pre-requisites/enablers for enhanced production and productivity.”

Kasolwe already hosts a cattle dip and spay race, hay barn, four valley dams and six valley tanks and according to Dr Beine, the new feed mill and hatchery will transform farming practices in the sub-region from just sustaining livelihoods into commercial farming.

The new feed mill has the capacity to produce five tonnes of livestock feed per hour, three tonnes for mash feed and two tonnes for pelleted feed. It has a floating fish extruder unit under construction to produce quality fish feeds one of the biggest challenges to the aqua culture sub sector.

Meanwhile, the hatchery has a capacity of producing 60,000 day-old chicks per week. Currently the poultry complex houses four parent stock rearing units with a capacity to maintain a minimum of 4,800 parent stock. There is an immediate plan to double this holding capacity so as to utilize the hatchery’s full capacity.

The complex has benefitted the Busoga community by reaching over 800 households supplied with over 70,000 day-old chicks of Kuroiler and Rainbow rooster.