by Mubiru Ivan
in Business, Finance
15 0 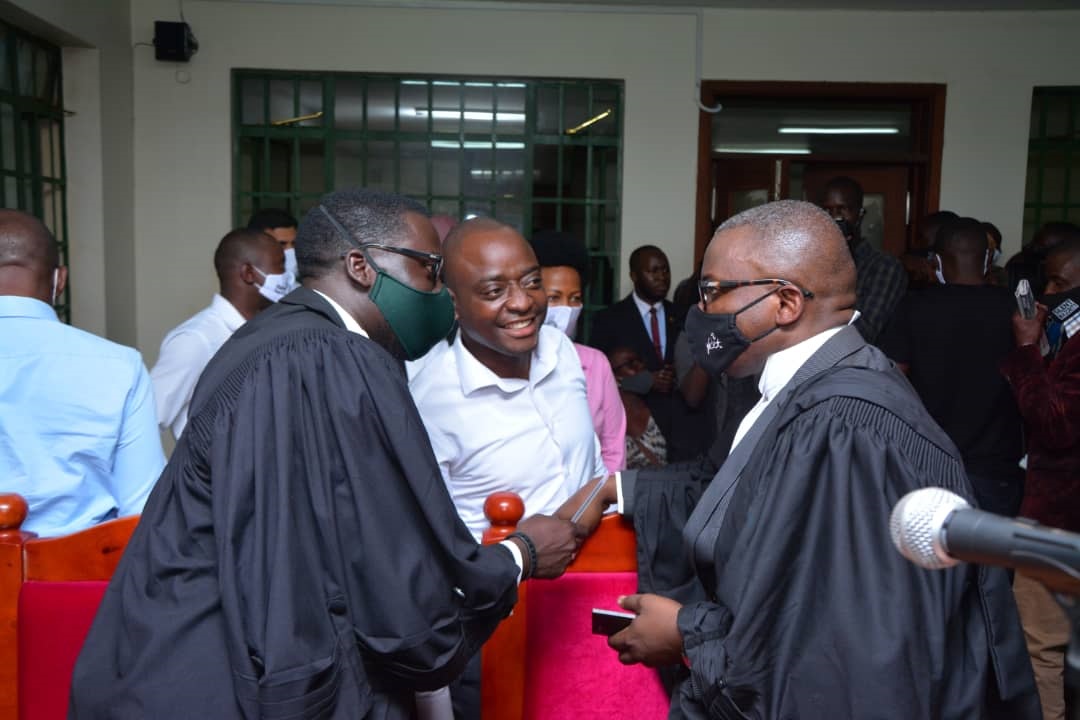 Ham with his lawyers at Court on Monday

The High Court of Commercial Division in Kampala has on Wednesday directed Diamond Trust Bank (DTB) to refund Shs120 billion which it illegally deducted from the accounts of Hamis Kiggundu the CEO of Ham Enterprises.

In his ruling, Justice Henry Peter Adonyo said that the Bank violated the Financial Act of 2004 and therefore directed that the Shs120 billion should be paid with interest of 8% for carrying out illegalities on the Ham’s accounts.

During today’s court session, Justice Adonyo faulted DTB Kenya for appointing its counterpart in Uganda to collect the loan facility from Ham Enterprises without fulfilling the set of legal requirements.

“The judge described the appointment of agents as  illegal”, unethical and breach of trust”.

DTB Bank was ordered to refund all the money it collected from Ham’s accounts to pay for the loans on top of returning to him all the titles which he had surrendered to the financial institution in form of collateral security.

In January 2020, Ham Enterprises dragged Diamond Trust Bank Uganda and Kenya to Court for fraudulently debiting over Shs120 Billion from their Shillings and Dollar accounts. The Bank having failed to refund the unlawfully debited monies from the company’s accounts, Ham Enterprises instituted legal action against the Bank for recovery of the same. Diamond Trust Bank responded by alleging demand of Shs39Billion and asking the court to Impose regulation 13 that was just smuggled into the mortgage act onto Ham Enterprises.

Ham Enterprises however objected as the Company was the Victim to the Bank’s fraud and perhaps the Plaintiff hence regulation 13 could be interfering with their right to fair hearing as provided in the constitution.

A landmark win was registered in favor of Ham Enterprises with Diamond Trust Bank Conceding as the regulation was ruled out of Ham’s Case. The High Court resultantly allowed the hearing of The Company’s Shs120 Billion fraud case filed against Diamond Trust Bank (Uganda and Kenya) to proceed.

With total patriotism to save all fellow countrymen from the Bankers impunity and exploitation as provided by this regulation, Ham Enterprises U Ltd additionally petitioned the Constitutional court Challenging the Constitutionality of Regulation 13 of the Mortgage act, that requires Bank Customers to first deposit 30% of the disputed amount in the filled case before the hearing can proceed, seeking this act to be outlawed from the Constitution of the Republic of Uganda.

With full knowledge that the bank had carried out illegalities, it decided to call for an independent joint audit in trial to preempt the acts of illegality so as to save their illegality based and questioned defense.

These events had been followed by Justice  Adonyo of the Commercial Court directing the Institution of Certified Public Accountants of Uganda to appoint an independent auditor to carry out account reconciliation of the financial transactions which are based on the credit facilities between Ham Enterprises and DTB On August 31, 2020.

Ham Enterprises however asked the court to halt the auditing process pending the determination of another application in which it is seeking to strike out the defense statements filed by Diamond Trust Bank (DTB) Limited as they arise from illegalities.

Through their lawyers: Fred Muwema and Arnold Norgan Kimara, Ham Enterprises alleged that the said challenged credit facilities are in contradiction and repudiation of the court’s investigation into the legality of the credit facilities and thereby violates their right to a fair hearing.

Ham Enterprises noted that the Financial Institutions Act does not expect a foreign bank to lend money in Uganda because it expressly forbids them to do so.

“In perpetuating the above acts and omissions, it denied the government of Uganda tax and non-tax revenue in addition to flouting the sovereign laws of the Country.This amounted to an infringement on the public law and public rights which this court is enjoined to protect in the public interest.