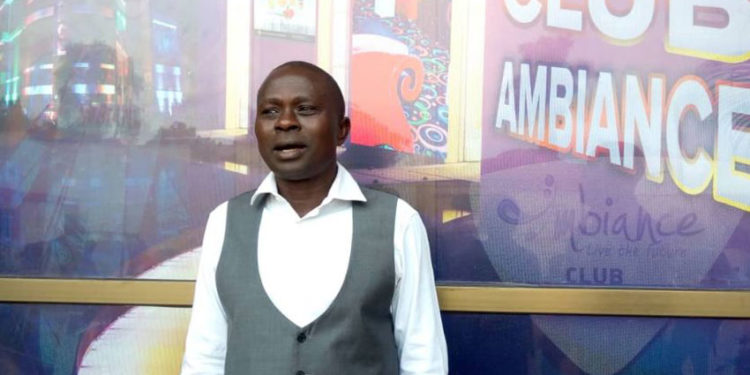 Joseph Kiyimba, the proprietor of Club Ambiance remains a passionate and committed man who has modernized Night club business in Uganda. Because of that, he has become the role model in the entertainment industry.

Brian Mugenyi, caught up with him and he shared his humble journey of starting up the Club.

Oh! Thank you…There’s a lot more to disclose that transpired on that day. But I thank God for making it happen. Drinks, foods, music and multitudes of my fans, made the day monumental. And for that case, I’m very proud
and overwhelmed with your support.

For someone who is seeing you here for the first time, how could you explain to him or her about yourself?

My name is Joseph Kiyimba, 51 -years-old and locally well-known as the governor for the leading Night Club Ambiance in Uganda. I was born to Mr Francis Sserwadda and Ms Ssepereza Nasaka residents from Nvubu village Kyotera District. By the way, I am the fourth born of all the twelve children in our family. Away from that, I’m married to Mrs. Annet Kiyimba whom we produced beautiful and handsome children.

Of all the names that you could choose, why did you go in for Club Ambiance?

The word Ambiance comes from a French word called Ambience, which means a pleasant place. I found it advantageous for me to use it because it blends well with the place I needed to build for our fans, and it’s relaxing when pronouncing appeals to everyone.

You’re much known for owning Club Ambiance, what inspired you to invest in such a multi-billion business?

My family background helped me a lot here. First of all, my grand relatives were percussionists. They could play music instruments such as drums to mention but a few in the village and through them I was able to pick a leaf of loving music from them. Such, motivated me to invest in a business which is now giving me happiness.

Leaving that aside, how did you come up with the idea of investing in club business?

I first formed a mobile Disco called Lions Mobile Disco in Masaka Town in 1994. From there, I picked the courage of expanding my horizons by building Club Ambiance, and on November 23, 1996, its doors were open for all Club goers. In 2008, I re-constructed it and in 2010, were-opened it.

Today, we are seeing other branches of Club Ambiance in other districts, why chose to expand it?

It was an informed decision based on what my fans needed and as well as the entertainment industry itself. It gave me hardship on the other hand especially in Kampala when we were interrupted by Kampala City Council Authority (KCCA) after a year and got closed in 2014.

They asked a lot of things to be done, but we stationed exactly what they needed and the club eventually resumed. In Mityana, the Club got opened up in 2012, but am doing all this to entertain people, give them employment and I hope to leave a legacy because such has never been here before.

Should we think that you were very knowledgeable enough to move on with this business?

I don’t think so, but I loved what I was doing. First and foremost, I did not go for a bachelor’s degree in a University in order to master this business. But being a businessman alone helped me run this business. Why? It gives me a room to be very flexible and calculative in whatever am doing.

Was there any other Club business running in Masaka before Club Ambiance?

Yes, it was not me who pioneered night Club business here. We had Folk Land Disco which also worked on Friday, Saturday and Sunday the way I also open up mine. But still, for them they did not attract fans as anticipated. Eventually, after realizing that they cannot compete with me business wise, they closed up and vanished away.

Now, there’s a new Club Tarven kick opened up few months ago here, aren’t so scared for its existence?

Why should I be? I’m just happy to have a new baby born in our city. And that’s how the modern world is supposed to be. You cannot stop development. For me, such looked like a form of development. It actually, tells of how people have realized that there’s a fortune in Night Club business.

Away from Club Ambiance, what else do you do?

I run Ambiance distillers company which today employs one hundred people. Here, we are dealing in processing Ambiance waragi. I went for it after realizing that I had made some profits out of Club business, and I needed to resort to an additional business. The factory is now eight months young and our customers are very appreciative with our products.

Do you think your education background contributed heavily to your success?

I did not achieve thriving education as desired. To crown it all, I attended Kirembwe primary school and later dropped out of school in senior two at Masaka Secondary School in 1986.

Why drop out of school so early?

My parents could not raise school fees for me. I started brewing crude waragi locally known as (Tonto) with my parents because it was the family job and later we could sell it to village bars. Afterwards, I joined the textile business.

Talk about your days in textile business

I used to vend clothes in different markets in Greater- Masaka, before joining motor spares business in 1992.

But it’s not all about education, sometimes its luck, hard work, patience and the level of commitment you exercise on what you doing that helps you be a successful man.

Your Night Club business also gives a platform for Uganda’s music be heard, who is you best musician?

Bobi Wine is my overall best artiste. I hear, in different circles that he is also the People’s president. Truth be told, I like his song: Nyimbira Kabaka Wange and Irene Namatovu, of the New Eagles Band is my best female artiste.

What kind of music do you normally listen too?

Personally, I love slow music and I usually spend most of my leisure time listening to music, if not watching football. I’m a diehard fan for Liverpool, SC Villa, and Buddu Fc in Buganda’s Masaza Cup.