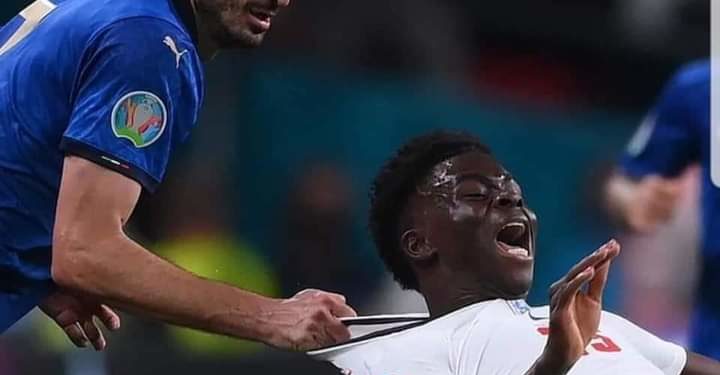 Euro 2020 finals: Once again, England has found out the hard way – sitting and wishing does not make a man. Not hype, not noise and certainly, not kids like Saka, Rashford & Sancho. To win a final, you’ve got to go out and show on the field that you want to win it and play like champions do. England did neither.

On this most important day in their football history since 1966, they hid from responsibility. The seniors like Trippier, Luke Shaw, Sterling and Phillips – all in good form – shied away from penalty responsibility. It’s always been a mentality problem for England. Coach Southgate; who missed a penalty in the 1996 semi-final against Germany, knew better than forcing players who were afraid of responsibility.

So he went for his young guns – Rashford, Sancho and Saka. Little did he know that this was not a stage for toddlers. Saka had a terrible evening after being bullied all night. Chiellini had put the fear of God in him. How on earth was he ever going to score the decisive penalty? Rashford and Sancho did not have a kick on the ball for 120 minutes. It clearly melted their nerves. They are kids.

In the end, England did what England always does at this level – they bottle. Mentally they are never prepared. It’s unfamiliar territory.

Their DNA is not made for this. On the night, they scored inside 2 minutes and the first half belonged to them. What followed from the 2nd half onwards was all in the head. The stronger Italy became, the more nervous England grew.
They were bossed, cajoled and outpassed.

Once Italy equalised, it was game over. England lost the battle of wits and Italy applied brute force to disengage them completely. It’s tactics. The Azzuris were here to win not exchange pleasantries. Saka was made the prime example by their leader Chiellini.

And so, now, the world order has been restored. For a moment throughout last week, you feared that a new world order was on it’s way. England’s best is not good enough. Never been.

Harry Kane once more failing to show silverware for his goal scoring gift. Sterling once more freezing in a big cup final after his champions league flop against Chelsea.

This is the sad end to a story that could have been different had their big players stepped up when it mattered most. They didn’t. English players don’t. England doesn’t. It’s not in their DNA.

The law of averages explains the relevance of the word that English fans now hate with revulsion – Pedigree.

Congratulations ITALY. Thank you for maintaining the world order. We can all enjoy and get back our lives now. The tears have returned home.