When rebel leader – now Ugandan President – Yoweri Museveni formed the National Resistance Army (NRA), which fought a guerrilla war in the bushes of Luweero, against the government of former President Milton Obote, many Rwandans or the Banyarwanda joined and would eventually form a core part of the group.

by Brian B. Mukalazi
in Politics
8 0 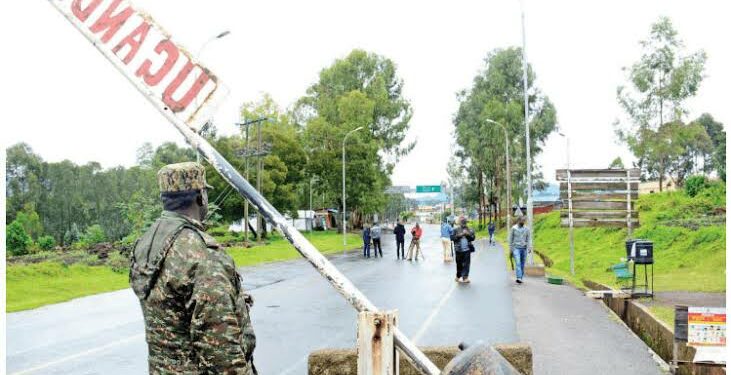 The recent double-headed World Cup qualifier matches played between Uganda and Rwanda saw Uganda trounce Rwanda in both encounters with a one-nil score-line in each. While I watched these two highly competitive soccer matches, my mind could not help, but wander away from the sport and into the currently cold diplomatic relations between the two countries.

The matches reminded me of the Katuna/Gatuna border between Uganda and Rwanda that remains closed to human and cargo traffic more than two years since Rwandan President Paul Kagame ordered its closure. This came after Rwanda accused Uganda of supporting political and armed groups said to be hostile to Rwanda, as well as of illegally arresting and torturing its citizens.

Today, both countries continue to trade accusations of interference in each other’s affairs. But factually speaking, the strained relations between the two neighbours did not start with the border closure, there had already been glaring signals in the past, all too clear for everyone to see.

The historical ties between the two countries’ ruling political movements – the National Resistance Movement/Army (NRM/NRA) and the Rwandan Patriotic Front (RPF) – may easily be considered as the most profound and protracted love-hate affair in Africa’s modern history.

Many senior members of both the NRA and RPF were once schoolmates, brothers in combat, and best friends who share lots of intimate memories together. You will recall that the late Gen. Aronda Nyakairima – Uganda’s former Army commander and Internal Affairs Minister – was the best-man at President Paul Kagame’s wedding in 1989.

Therefore, it’s sad to see former allies, brothers, turn into bitter foes. Ironically, the principal factors that brought these two groups of individuals so closely together over four decades ago, are the very factors largely accountable for their present dampened relations – Those factors are: military power and dominance!

When rebel leader – now Ugandan President – Yoweri Museveni formed the National Resistance Army (NRA), which fought a guerrilla war in the bushes of Luweero, against the government of former President Milton Obote, many Rwandans or the Banyarwanda joined and would eventually form a core part of the group.

It was here that the charismatic Fred Rwigyema first fought alongside a number of future RPF leaders including future Rwandan president Paul Kagame, James Kabarebe, Patrick Karegeya and Kayumba Nyamwasa. And during the NRA’s first operation, an attack on Kabamba military barracks on February 6, 1981, that involved the legendary twenty-seven guns and thirty-four men, Rwigyema and Kagame were part.

Why did many Banyarwanda join the Bush war? Author and journalist Michela Wrong partly attributes this to the events of September 1982 when President Obote’s government ruled that all members of the Banyarwanda community were to be moved to refugee camps. This followed systematic killings, rape and violence.

According to estimates provided by Professor Mahmood Mamdani, by the time the NRA captured state power in 1986, it was 16,000-strong and roughly 4,000 of the soldiers were Banyarwanda.

After the war, many Rwandan comrades ended up serving in different positions in the new NRA/NRM government. Rwigyema became the deputy commander-in-chief of the armed forces, second only to the President when it came to military decision-making.

Once the Bush war had been won in Uganda, the Rwandan Patriotic Front (RPF), formerly Rwanda Alliance for National Unity (RANU), would take shape under the leadership of Fred Rwigyema. And on October 1, 1990, the war against the Rwanda government began through the north-eastern part of the country.

Whereas the war caught many NRA stalwarts by surprise, it was common knowledge that the positions of the RPF men inside the Ugandan army and police gave them easy access to armouries and barracks. “They took everything that Uganda possessed in terms of military equipment…From RPGs, grenades, SMGs, machine guns, trucks, bullets, boots and uniforms”, writes Michela Wrong.

However, on the second day, Rwigyema was mysteriously killed and by the end of October, the RPF was largely defeated by the Rwandan Army. With thousands of soldiers pouring back across the Ugandan border, the RPF was fragile and on a brink of a humiliating loss.

It took the return of 33-year-old Kagame, who many believe was hand-picked by President Museveni, from his training course in the United States to take the reigns as the new RPF leader and restore sanity. But without a single doubt, RPF’s survival at the time depended entirely on Uganda’s kindness, manifested through access to hospitals, food and an operational base.

In August 1993, the Arusha peace agreement was signed in a ceremony witnessed by Tanzania, Uganda, Burundi and the Democratic Republic of Congo. It catered for the establishment of a broad-based transitional government including the RPF and opposition parties.

Issues of mistrust, disrespect and ego

Like with so many fights, it all boils down to respect, or the perceived absence of it.  Michela Wrong quotes a retired Ugandan commander as saying: “We used to look at the RPF as young sons, not even brothers”.  And according to John Nagenda: “Museveni used this whole ‘My children, my boys’ line when he talked about the RPF”.

In retaliation, Kagame has been quoted saying: “Rubbish. We’re not your boys”.

When recalling the past, the Ugandans dwell on the way the NRA had welcomed the Banyarwanda into its ranks. And for that, the Ugandans still believe that the Rwandans owe them their victory. On their part, what the Banyarwanda remember, instead, was the NRA’s reliance on them to do its dirtiest fighting, Museveni’s failure to win them the right to return, and the sense of having always been unwelcome in alien territory.

The problem with history is not that people fail to learn from its lessons, but that they learn the wrong ones. For both the NRM and RPF, their most prized asset is the rich intertwined history they share. If only they could seat – man-to-man – reflect and work out their differences, Uganda and Rwanda would both be winners.

Mr. Mukalazi is the Country Director of
Every Child Ministries Uganda.
bmukalazi@ecmafrica.org