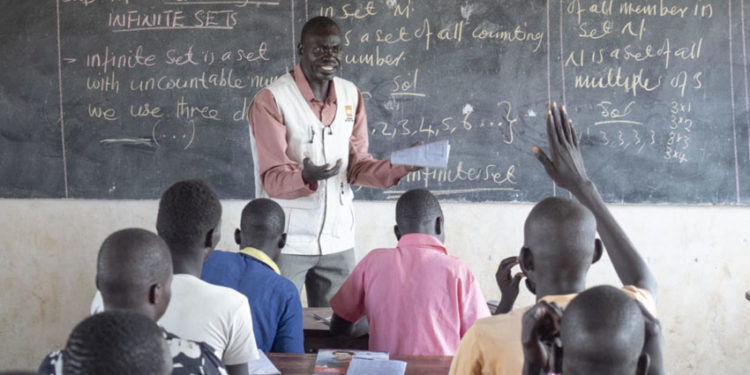 Luweero district leaders are worried over the increased numbers of pupils in government schools which has caused shortage of learning materials.

This is due to the two years Covid-19 lockdown that caused adiverse effects on the economy thus forcing parents to withdrawal their children from costly private owned schools to government aided ones.

The high population numbers in government schools in Luweero has created panic among district leaders as many schools lack enough classrooms,desks ,latrines ànd other learning equipments and as a result,some classes àre conducted outside while others are forced to sit down on the floor to have their lessons.

Gerald Kabugo a primary six teacher in Nsaasi Umea whom we found conducting a morning lesson outside ,blamed this on the government saying the classroom structures they have are not enough to accommodate the big numbers of pupils.

Kabugo is worried that students lose concentration due to the outside environment and they spend most of the time shifting for shelters.

In Luweero boys primary school,the situation is alarming as the number of students has almost doubled from 800 to 1346 forcing pupils to squeeze themselves on the available desks while others have to sit down in order to have their lessons ànd teachers’ movement around the classroom is limited.

Button Bbumba the headmaster of the school say ,they need more furniture to accommodate the excess numbers and he is worried of the students’ stàndards if the the situation is not rectified.

Erasto Kibirango the Luweero district chairperson say they have been overwhelmed by the situation as they have so far received 25 complaints and requests from headteachers .

Kibirango however,has urged governing bodies and other well wishers to intervene in order to curb off the escalating situation.

This has not only worried the district local leaders,but also the Katikamu North legislator Denis Sekabira who has promised to tàke the matter to the floor of parliament but blames the government for poor planning and organisation.