President Yoweri Museveni has told the people of Kiruhura and Kazo to stop lamenting about bad roads in the districts as the cause of their poverty but instead focus on doing things that will improve their household incomes.

His Excellency the President accompanied by the First Lady, Mrs. Janet Kataaha Museveni on Wednesday met farmers and leaders of Kiruhura and Kazo districts at Nswerenkye Primary School, kiruhura where he called on leaders at all levels to dedicate their energies on income-generating activities that will improve the livelihoods and families of the people they lead.

Poor infrastructure such as the bad road network in the region was among the issues raised by the Woman Member of Parliament for Kiruhura District, Hon. Jovanice T. Rwenduru which the President believes is necessary but not an impediment to improving household incomes.

“We shall work on all the roads but they should find stable families with improved household incomes. Tarmac roads will not take away poverty. Seek first homestead incomes (Entasya y’amaka), the rest will be added unto you,” Gen Museveni said, adding that he bought land in Kisozi, Gomba with a vision to create wealth despite the fact that the area had poor road network.

He noted that good roads have been constructed in many parts of the country to ease transport of goods and services but they’re instead being misused to dry cassava and maize.

The President was happy to learn from Reverend Samuel Mugisha, the Kazo LCV Chairperson that out of the 35,000 households in the district, 67% are involved in commercial farming while 33% in subsistence farming; most of them with small pieces of land.

He advised those with small pieces of land to venture into activities like poultry and zero grazing that do not require much land. He gave an example of a one Nyakaana in Rwengaju, Fort Portal who is getting 20 million shillings in one acre of land per year through poultry and dairy farming.

“When I go to heaven, I don’t want God to blame me for not getting you out of poverty. He will at least know that I did my part but you did not listen,” H.E Museveni added. 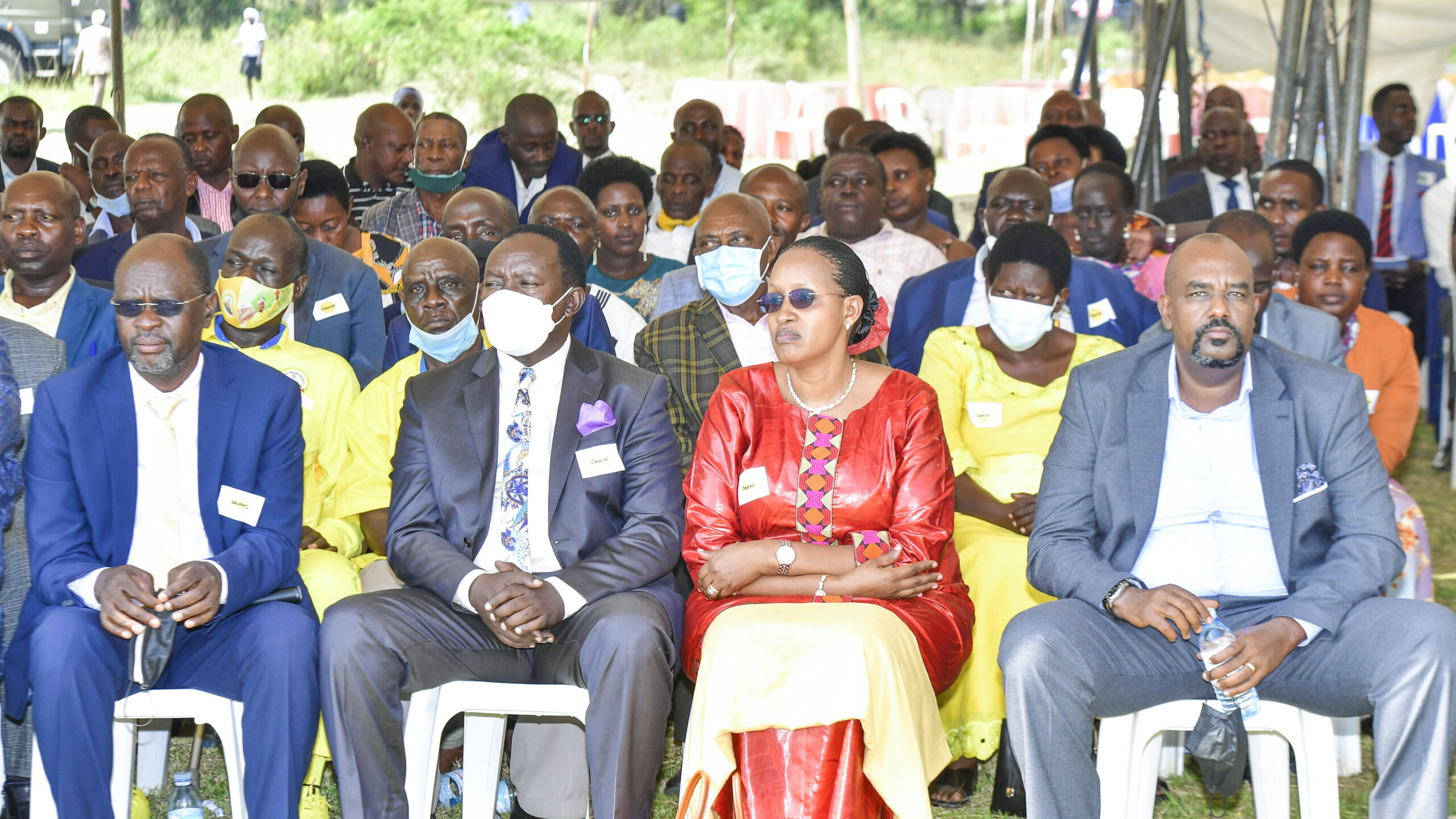 The Head of State further re-echoed the danger associated with land fragmentation saying it’s part of the hindrances to prosperity of Ugandans.

According to him, the culture of subdividing land among children especially when the owner dies cannot support commercial agriculture which is the backbone of Uganda’s economy as children will resort to selling off the land instead of undertaking collective investment.

“The idea is to mobilize the children of the deceased against dividing the land and property of their parents but rather create a legal entity in the form of a family company in which they are all directors, take executive decisions on enterprise selection and then partake of profits depending on shareholding, ” H.E Museveni said, adding that family wealth is not only good for the individual families and communities, but for the country as well.

He gave an example of England which is the same size as Uganda but in spite of having a higher population they understood the dangers of land fragmentation.

“They knew that it is bad to fragment land because they would be fragmenting wealth. That’s why you find big farms owned collectively. By doing that, family properties will be kept intact and you’ll benefit in future,” Gen Museveni noted,  adding that in some countries like Germany they put laws barring fragmenting land which is less than 25 acres.

Kiruhura District LCV Chairman, Mr. Dan Mukago Ruteteebya thanked the President for setting up a Regional Hub for skilling youth in different fields to fight unemployment. He however expressed the need for a district general hospital in order to improve health services.

Whereas the President agreed to their request, he encouraged leaders to focus on disease prevention through behavior change, improved hygiene, immunization and nutrition so that the country can save money and use it for other priority areas.

“Hospitals will be built but even the available Health Center III’s and IV’s have not been used effectively,” the President noted.

The meeting was also attended and addressed by among others, the Minister of State for Animal Industry, Hon. Lt. Col (Rtd) Bright Rwamirama and the Woman MP for Kazo Hon. Jenifer Abaho Muheesi.
Others in attendance were; Gen. Sam Kavuma who is the Chairman Board of Directors of Wazalendo Savings and Credit Cooperative Society (WSACCO), Hon. Wilson Twinomugisha Kajwengye (Nyabusozi county MP), Hon. Herbert Tayebwa (Kashongi constituency MP), Hon. Dan Atwijukire Kimosho (Kazo-county MP) and former Members of Parliament.