State House has distanced itself from a fake letter making rounds on social media, purportedly issued by President Yoweri Museveni.

In the fake letter dated 28 November,  2022, ‘President Museveni’ ordered an immediate arrest and reprimand of funders of a rebel group identified as Uganda Coalition Forces of Change.

“Uganda Coalition Forces of Change is a rebel group led by Frank David Ssemwogerere and it has been operating in Uganda for sometime. The criminal workings of the said group have been brought to my attention,” the fake letter reads in parts.

The author of the fake letter went ahead to name some of the funders of the rebel group who should be arrested. These include prominent businessmen; Al- Hajj Njubi of World Fisheries,  Hajji Kisitu Musitafa of Rwenzori Limited, Ibrahim Kitabalwa of City Tyres, Jabeeri Nsubuga of Mayuge Sugars,  Sserwadda Kalooli of Lwadda Pharmacy,  Karim Hirji of Imperial Hotels,  among others.

“The above mentioned people have been sponsoring terrorism through the said rebel group,  killing police officers, innocent civilians and stealing guns for some time. I therefore direct for the immediate arrest of these criminals (funders) and arraign them before the General Court Martial,” reads the fake letter purportedly signed by President Museveni.

However,  according to the Deputy Presidential Press Secretary,  Mr. Faruk Kirunda, the letter is fake and the general public should treat it with the contempt it deserves.

“The general public is highly urged to disregard a communication circulating on social media allegedly authored by H.E the President of the Republic of Uganda instructing the Chieftaincy of Military Intelligence (CMI) to arrest prominent businessmen for sponsoring
terrorism activities under a rebel group named the Uganda Coalition Forces of Change. The letter is dated November 28, 2022 and referenced PO/25,” Mr. Kirunda said in a statement dated Sunday, December 11, 2022.

“This letter carries misleading information and it does not originate
from the State House. State House does not undertake its communications in this manner,” he added.

Mr. Kirunda further clarified that arresting and investigating criminals is the work of the police and not State House.

He also noted that His Excellency the President is a big defendant of the rule of law and cannot issue such a misleading letter.

“The Uganda Communications Commission is requested to help in
tracing the authors of this letter and to have them apprehended and produced before the Courts of Laws for causing unnecessary anxiety and tension in the general public.” 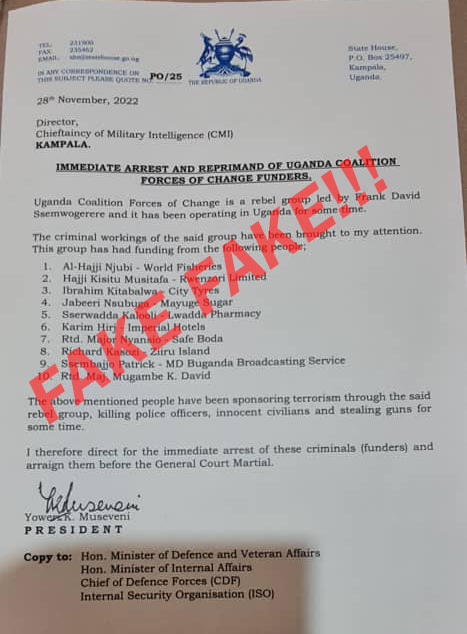