by Everest Mukiibi
in National, News
7 0
0

The Ministry of Public Service Permanent Secretary Ms Catherine Bitarakwate Musingwire has written to the Secretary General of Uganda National Teachers Union (UNATU) inviting him and colleagues for a meeting.

According to a letter dated June 28th 2022, addressed  to the UNATU Secretary General and signed by Ms Bitarakwate, the meeting is expected to take place on Friday July 1st 2022 at the Ministry of Public Service Boardroom.

Ms Bitarakwate asked the UNATU Secretary General Filbert Baguma to go with other 4 members of the Union Executive Members to discuss issues raised by UNATU that sparked off an industrial action that started on June 15th 2022.

Ms Bitarakwate made it categorically clear that the meeting will focus on the issues raised for industrial action.

The invitation by the Permanent Secretary comes after the UNATU Secretary General asked the teachers to stay at home until the government the issue of salary enhancement disparities.

However, sources from the Ministry of Public Service intimated to our reporter that the scheduled meeting will reach an agreement with UNATU in order for them to call off the industrial action.

The industrial action followed government’s resolve to enhance salaries of Sciences teachers to a tune of 300% against nothing for all other categories of teachers (arts).

Here below we reproduce the letter written by the Permanent Secretary and copied to the Minister of Public Service. 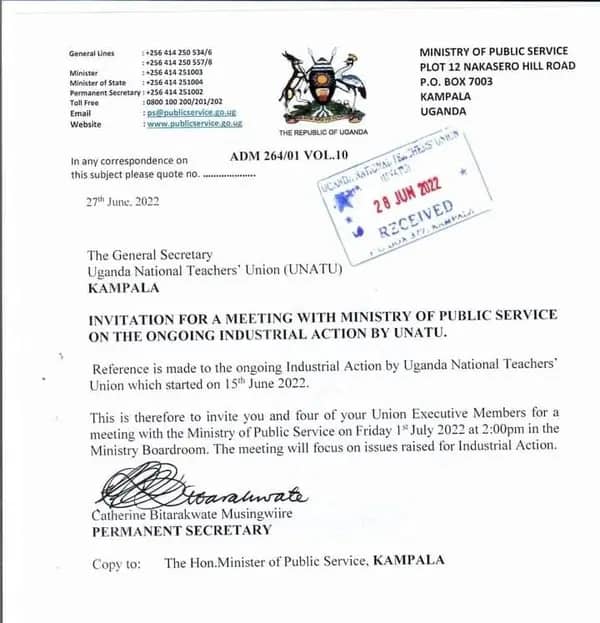 Everything is okay within UPDF; says army Spokesperson Brig Kulayigye