by Everest Mukiibi
in Court, News
1 0 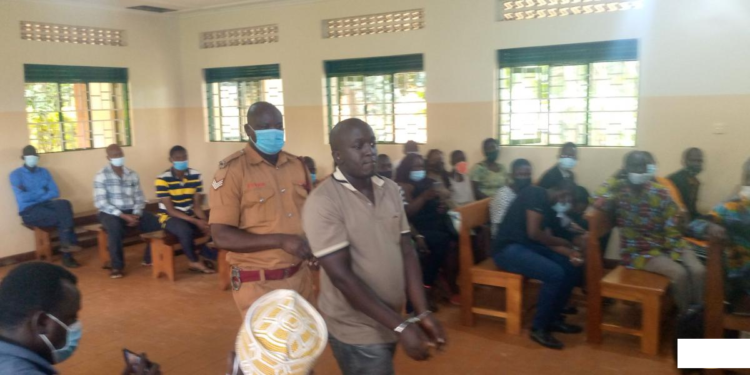 Kuloba being escorted by prisons officer

Derick Kuloba, a resident of Bududa district has earned himself a 15-year-jail term for attempted murder.

The Bubulo Chief Magistrate, Esther Nalungi sentenced Kuloba on Tuesday after finding him guilty of attempted murder when he chopped off the hand of 16-year-old Evelyn Namasopo, a former student of Bushiyi Christian Secondary School and resident of Nabweya sub-county in Bududa district.

The prosecution told the court that Kuloba attacked his victim near a forest on her way home to pick up food for her sick mother who had been admitted to one of the health facilities in the district in July last year. The convict reportedly attacked Namasopo for rejecting his marriage proposal.

In her judgment, Nalungi sentenced Kuloba to 15 years in Jail on grounds that he wasted the court’s time and didn’t show any remorse for his action. She noted that the 15-year-jail term will help the convict to reform and return to society a better person.

“The convict is 27 now, this sentence gives him a chance to return to society still young and reformed, at the same time the sentence will serve as an example to the youth, not to commit similar crimes,” Nalungi ruled. The magistrate took into account the four months the convict spent on remand.

The court also awarded the victim compensation of Shillings 50 million since her family has used a lot of money for her treatment. The state prosecutor, Godfrey Wakasadah welcomed the sentence noting that they prayed with the court to hand the convict a minimum punishment.

The Defense lawyer, Geoffrey Nappa, said that he will wait for the full judgment and detailed court proceedings before advising his client on their next step. He, however, hinted at the possibility of filing an appeal noting that the magistrate who delivered judgment was not the one who heard the case.