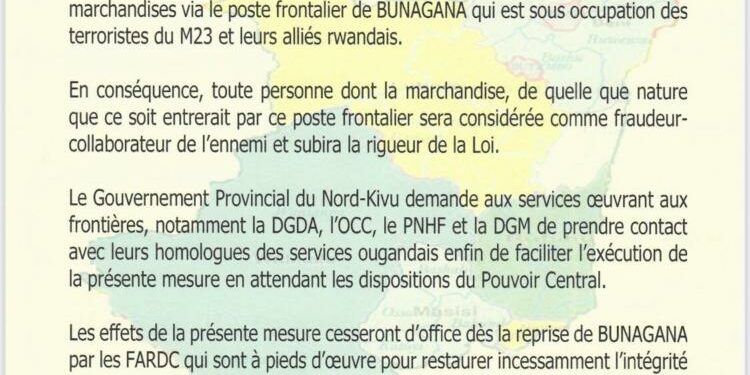 The Democratic Republic of Congo government has warned the business community and the public to shun using Bunagana route, saying its now under occupation of M23 rebels and their Rwandan allies.

The strategic border point of Bunagana was recently captured by M23 rebels and Congolese government has tried to recapture it from the rebels all in vain.

In a statement released on Monday, signed by Lt Gen Ndima Kongba Constant, the military governor of North Kivu, said any person whose merchandise, of whatever nature, enters through Bunagana border post will be considered as a fraudulent collaborator of M23 and will suffer the rigors of the law.

The M23 terrorists have started collecting taxes from cargo drivers who dare use Bunagana.

DRC accuses Rwanda of aiding M23 terrorists. A regional force will soon be deployed in DRC but Rwanda won’t be allowed to participate.

Below is the statement from North Kivu.

The Provincial Government of North Kivu informs Economic Operators, Customs Brokers and Traders that it is strictly forbidden, until further notice, to proceed with the import and export of goods via the border post of BUNAGANA which is under occupation of M23 terrorists and their Rwandan allies.

Consequently, any person whose merchandise, of whatever nature, enters through this border post will be considered as a fraudulent collaborator of the enemy and will suffer the rigors of the law.

The Provincial Government of North Kivu asks the services working at the borders, in particular the DGDA, the OCC, the PNHF and the DGM to contact their counterparts in the Ugandan services finally to facilitate the execution of this measure pending the provisions of the Central Power.

The effects of this measure will cease automatically as soon as BUNAGANA is taken over by the FARDC who are hard at work to immediately restore the territorial integrity and the authority of the State.