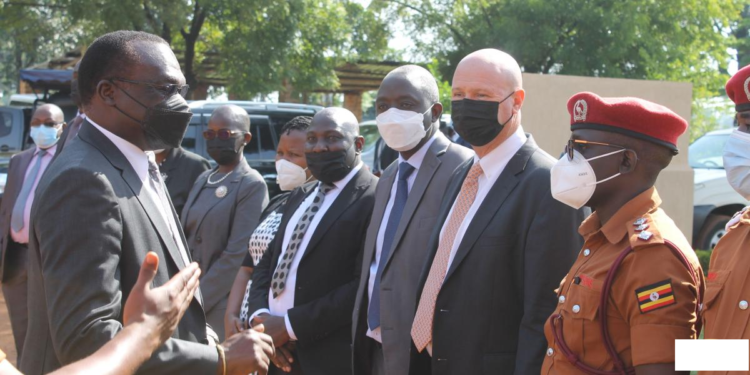 The inmates who are on remand and conviction, presented their petition to the Chief Justice during his visit to Gulu Main Prisons on Monday through convict G. 234/2017 Michael Oyite the Deputy Overall Katikiro U.G Government Prisons Gulu Main.

They claim that the slow court processes and delayed justice have caused case backlogs in courts, congestion in the prison facilities, and miscarriage of justice. A legal maxim states that justice delayed is justice denied.

The inmates are pleading with the government through the judiciary to make access to justice better and increase the dispensation of justice.

Convict Oyite says they want the number of normal high court sessions running at Gulu High Court increased to address the challenges of the high number of committals.

For instance, he says that the inmates say that they are informed that this year only two high court sessions have been heard in Gulu and Kitgum High Courts, adding that some cases date back to 2016 and have not been listed for the high court hearing.

They also want an additional resident judge to be posted to Gulu High Court to support the one available given the size of the high court jurisdiction that covers eight districts.

Oyite adds that they also want the plea bargain to be fully operationalized at lower courts and promoted by the judicial officers of the lower courts for expeditious dispensation of justice.

Other concerns include regular scheduling of high court sessions for sexual gender-based violence to reduce case backlogs, supporting prisoners with materials on court users guide and legal documents for sensitization and creation of awareness about legal matters and the establishment of a permanent court of appeal in Gulu

They also questioned why simple cases take long in courts, decried discrimination in bail and fixing cases for hearing, inequality before court, loss of court files from the court, trying accused in absence of victims, and delay in the court of appeal.

He pointed out that the judiciary needs to post another resident judge in the area and also create more courts within the different districts to enhance expeditious judicial processes.

In response, Chief Justice Owiny Dollo admitted to the problems but noted that the judiciary is set to create lower courts in all constituencies in the country, and a Chief Magistrate Court in all districts adding that courts of appeal will also be increased in the country with one in Gulu for the mid-north region.

This he says will guarantee ease of access to courts and equitable court dispensation of justice.