The 2022/23 budget is unique and pro-people, says PSST Ggoobi 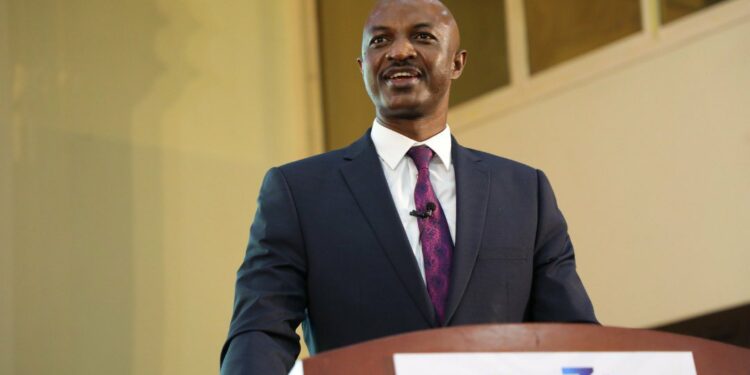 The Permanent Secretary and Secretary to the Treasury (PSST), Ministry of Finance, Planning and Economic Development, Ramathan Ggoobi has  revealed that the 2022/23 national budget is unique and pro-people therefore Ugandans should embrace it.

Speaking during the post-budget breakfast conference at Hotel Africana on Monday, Mr Ggoobi said that the budget was designed based on three major goals which include among others;transforming the 39 per cent of the households that are still in subsistence to move to the monetary economy.

“This is therefore a transformational budget. It is a way that targets to support Ugandans who are still out of the economy, to join the economy because it’s overly concentrated in a greater Kampala Metropolitan area where 65 percent of GDP is produced. We want the economy, or economic activities to be widespread broad based economy across the country by supporting those, especially in subsistence agriculture to join the economy,” he said.

Mr Ggoobi added that the second goal is to support business and economic recovery from covid-19 and restore their activities to their pre-pandemic levels and the third goal is to protect households from the rising prices of essential goods and services using fundamental policies which are prudent and sustainable.

“That is why it was termed a pro-people budget because it’s investing a substantial proportion of the money to be spent in the coming Financial Year in areas which are going to directly benefit the people or indirectly trickle down to the people, for example, Human Capital development was allocated Shs1.2 trillion, and a relief and recovery funds are also there to support businesses to recover and the Parish Development Model.”

He revealed that starting next month, the government is going to start giving out money to small groups of people at the Parish level as a way of implementing the Parish Development Model (PDM).

“We want the budget of Uganda to become more responsive to the national priority that when we read priorities on paper they are also reflected visually and we avoid the rhetoric of just speaking good statements when the money is elsewhere. Over the years the government has been using the incremental budgeting principle (Where resources are locked up in areas which have ceased to be the priority and in case of any other priority government borrows money or increases tax to raise revenue to finance the new priority thus adding to other money already in the budget),” the economist said.

He emphasized that such type of budgeting had created problems because it always left the government with no option but to borrow more or increase the tax that is why every year there has been new taxes or new tax rate. This is because of the new priorities that require more money.

“Therefore, beginning next year, we have used what we call a redistributive budgeting principle by redistributing money from areas that have ceased to be priorities to current priorities. We opened up the budget and looked at areas that used to be priorities but are no longer and we collected over Shs1.7 trillion from other areas into the basket and that is the money which we use to finance the new priorities including the Parish model, we are going to finance it without borrowing a coin or increasing tax. And also, all the money we have used to enhance the salaries of health workers and science teachers we raised from the redistributing process.”

Meanwhile, in terms of resources; Domestic resources will add to Shs30.8 trillion (46.8 per cent) of the budget whereas URA is supposed to collect a total of Shs25.6 trillion. Shs 23.8 trillion tax, Shs 1.8 Trillion, non-tax revenue this is the highest amount of tax revenue Uganda has ever collected in History.

However, Shs5 trillion is going to be borrowed domestically while Shs9 trillion will be borrowed externally purposely for main projects.

“If we successively use this budget efficiently our growth is going to increase to 6 per cent in the next financial year, from 4 per cent and our GDP is projected to rise to Shs 174 trillion, debt to GDP ratio is also likely to rise to 51.3 per cent, per capita income likely to raise from USD1046 this year to USD 1049 next year, if we could sustain this for the net two years world bank will declare us a middle-income economy,” he said.