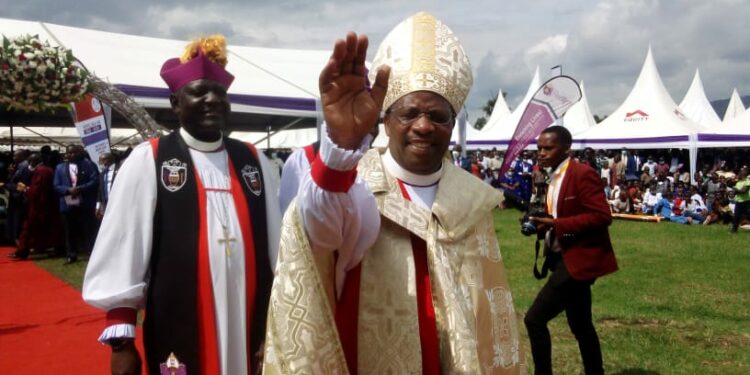 It was all joy in the Kigezi region as the Archbishop of the Church of Uganda, Stephen Kaziimba consecrated Rev Can Gaddie Akanjuna as the 6th Bishop of the Kigezi Diocese.

While making his maiden speech, Bishop Akanjuna said his main task is to focus on missionary and evangelism to strengthen the work of God in the Diocese of Kigezi. He pledged that he will work with everybody regardless of their status in communities for the development of the diocese of Kigezi.

“I will promote home cells for bible study, promote boys and girls brigade, promote health in line with government programmes, secure land titles for the diocesan land, promote unity among Christians, ensure that the pension funds for the retired clergy are got in time, and I am ready to mobilize Christians to form SACCOs so that they can benefit from the Parish Development Model.”

But who is Bishop Akanjuna?

Bishop Gaddie Akanjuna was born on 10th August 1962 at Kigata, Kyanamira Sub-county, Ndorwa County in Kabale District. He is a son to Elikana Nkundeki (died) and Dorothy Ekyohangirwe.

He joined Kigata Primary School at the age of 12, that is 1973 and completed his primary education in 1980. He attended Bukinda Senior Secondary School for his O-Level and completed it in 1984.

After his Ordinary level, he did not go to the Advanced level, but rather, he went to Kabale Teachers’ College where he obtained a Grade III Certificate in the teaching profession.

While at Kabale Teachers’ College, Akanjuna did not know anything concerning God and was a regular drunkard and a typical sinner. He says that when he accepted Christ on 19th June 1988, he was saved and became a new creature. In the same year, he weeded his lovely wife Jackeline Charity on 3rd December.

“I was a notorious sinner, struggling with hatred, fornication and drunkenness. The day I accepted the Lordship of Jesus Christ, I experienced total joy and my life did not remain the same. God has seen me through many challenges. I uphold a life of total commitment and accountability, striving to have eternal life,’’ he said in an interview with media during the consecration day over the weekend.

After accepting Christ, he went to Bishop Barham Divinity College for an ordination course in 1993 and he was ordained in December 1995 at St Peter’s Cathedral Rugarama.

After his ordination, he was posted to Butobere Parish where he served as a parish priest for 6 years. While at Butobera Parish, in 1998, he enrolled at Uganda Christian University for a Diploma in Theology.

On Acquiring his Diploma in Theology, he went back again to Uganda Christian University in 2001 and acquired a Bachelor of Arts with a Diploma in Education in 2004.

After graduation, he was posted to Kantare Parish as a Parish Priest, a position he served for seven years. After seven years at Kantare Parish, Bishop Akanjuna was appointed an archdeacon on October 1, 2011, and since then he has served in different archdeaconries such as; Rukore Archdeaconry where he served from 2012 to 2016.

He also served at Kikungiri Archdeaconry from 2016 to 2019 and All Saints Church Archdeaconry in Kabale district where he has been working prior to his new appointment as the 6th bishop of the diocese of Kigezi.

He is a quack! Uganda Medical Association distances self from man who raped sick girl in 'treatment room'